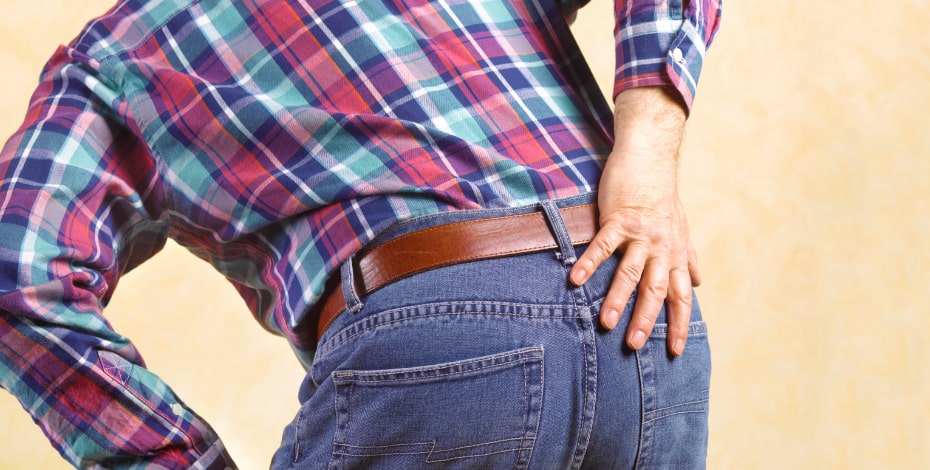 Jon Ford presents a case in which treatment informed by a hypothesis of a nociplastic-dominant pain type was highly effective.

Low-back-pain (LBP) is a common and costly problem in the western world (Hurwitz et al 2018).

Clinical guidelines recommend the identification of red flags and radiculopathy, and in the absence of such features, management of LBP as a ‘non-specific’ condition (Oliveira et al 2018, Foster et al 2018).

The International Association for the Study of Pain (IASP) describes three pain types (IASP 2018): nociceptive pain (arising from actual or threatened damage to non-neural tissue and is due to the activation of nociceptors), neuropathic pain (caused by a lesion or disease of the somatosensory nervous system) and nociplastic pain (arising from altered nociception despite no clear evidence of actual or threatened tissue damage causing the activation of peripheral nociceptors, or evidence for disease or lesion of the somatosensory system causing the pain).

This atypical case of acute LBP (

Mr X, a 57-year-old full-time storeperson, was referred by a physiotherapist (also his son) due to uncertainty regarding the nature of the problem, high severity of the symptoms/disability and minimal improvement.

He reported frustration with the lack of available diagnosis and rapid-acting treatment.

Four weeks prior to assessment, Mr X lifted a box at work and noticed a brief lumbar-pulling sensation.

Two- weeks prior to assessment, and with no precipitating factors, Mr X woke with severe right lumbar/buttock/leg pain, paraesthesia and burning (8/10), and was unable to go to work.

Mr X attended emergency two days prior to the assessment due to not coping with the pain, and was discharged home with a recommendation of physiotherapy, paracetamol (500mg x six per day) and ibuprofen (200mg x six per day), which he added to his medication regime.

Competing hypotheses were identified for further testing, including:

In the waiting room, Mr X was kneeling on the floor/leaning on a chair due to pain, accompanied by his partner and son.

A subjective assessment was completed in crook-lying where he had no symptoms.

Gait/transfers were slow and guarded. Standing posture/alignment was within normal limits (Kendall et al 2010), with increased activity of the external obliques/erector spinae, apical/shallow breathing and resting lumbar/buttock symptoms of 7/10.

There was no change in resting symptoms or muscle activation following one minute of relaxed, controlled breathing sitting on a high plinth with feedback/ strategies for reducing muscle tone.

Sitting posture/alignment was similar to standing but with increased symptoms (9/10).

Hip active-movement testing/overpressure and lower-limb neurological testing was normal apart from some inconsistent sensory changes in the right antero-medial thigh.

After physical examination, preliminary hypotheses were refined, with the most relevant being:

However, in order to refine hypotheses relevant to optimising recovery (Jones & Rivett 2019, Ford et al 2019) within a biopsychosocial framework, an individualised treatment approach was taken, consisting of:

This progression was to ensure the primary hypothesis of segmental articular impairment as the source of symptoms was not under-treated and due to positive within-session changes. In parallel, further passive-movement assessment/mini-treatments on the right piriformis and femoral nerve were undertaken.

However, in all passive techniques, progressions were limited by pain severity.

Advice/reassurance were progressed to include a graduated walking program, reassurance and discussion around work planning/prognosis, exploration of contingencies regarding prognosis (uncertain but a return to full function likely), reassurance regarding MRI findings and the challenges providing a diagnosis in LBP (Oliveira et al 2018).

Between session 3 and 4 the partner of Mr X reported major concerns that he was in bed most of the day and had withdrawn from social/family engagement.

On questioning during session 4, Mr X reported feeling depressed, teary and irritable, acknowledging that his pain symptoms were worse during these periods of distress.

Low DASS21 scores were discussed with Mr X, revealing that he had under-reported his mood issues on questionnaire completion.

Over the initial three sessions, further refinement of hypotheses was enabled with the most relevant being:

The worsening of Mr X’s pain symptoms when distressed supported a central sensitisation mechanism based on modulation within the central nervous system, including reduced descending inhibition (al’Absi & Flaten 2016).

Based on these hypotheses, a referral was facilitated to a pain physician and psychologist.

It is not possible to make definitive conclusions on pain type from clinical assessment.

However, rather than pursue further nociceptive-based treatment (eg, further exploration of the effect of altering muscle activation and/or movement strategies), a program of pain neurophysiology education and structured, goal-oriented, graded activity/exercise (Moseley & Butler 2017) was conducted.

However, the program had the explicit goal of ceasing ‘passive’ treatments that may reduce self-efficacy (Trifiletti 2006) and time rather than pain-contingent increases in exercise/activity to facilitate insight that exercise/activity can be helpful even in the presence of some pain (Ford et al 2012).

There is limited evidence for most treatments in acute LBP (Oliveira et al 2018) and clinical reasoning suggested the mechanisms common in chronic LBP were relevant in directing the treatment approach with Mr X.

A simple pain neurophysiology explanation on heightened sensitivity of the central nervous system and the potential relevance of mood/thoughts in ‘turning up the amplifier’ was discussed with reference to Mr X’s own observations on the effect of mood and the breathing medication mini-treatment on his LBP.

Further discussions were had around the absence of a rapid acting treatment and prognosis.

The exercise/activity focus was on walking, sitting, driving and return to work, which required employer liaison.

Graded social activity was also commenced with family/friends as well as desensitisation training to light touch in the anterior thigh (Moseley & Butler 2017).

Mr X engaged well with the program with slow but consistent progressions in activity/exercise as expected in severe nociplastic-dominant LBP.

However, at session 6, he described difficulty/distress in accepting an absence of a rapidly acting treatment.

Extended collaborative discussion on the nociplastic-dominant nature of his pain problem (with psychosocial factors and central sensitisation) led to marked improvement in symptoms and disability in session 7.

Mr X believed this change was due to acceptance of the nature of his LBP leading to a reduced perceived threat/anxiety/depression and a resultant ‘winding down’ of his nociplastic pain (Moseley & Butler 2017).

Ten sessions were completed over an eight-week period with marked improvement. After a graded return-to-work program (including physiotherapist certification of capacity and employer liaison), Mr X was comfortably completing normal hours and modified duties (forklift).

He had worked up to a daily high-level exercise program by session 9, comprising:

All exercises were progressed from initial low intensities/repetitions with an increase in weight, and reduction in repetitions to minimise the risk of exacerbations, occurring when 3 x 15 repetitions had been achieved (Ford et al 2012).

The pain physician confirmed the nociplastic pain type and replaced oxycodone with tapentadol (50mg x 2) and lignocaine patches. By session 11, all medication had ceased.

Three sessions of psychology focused on supporting the graded activity/exercise program and re-engagement with social/family activities. Mr X found both these interventions helpful.

Between session 10 and 11, Mr X returned to normal storeperson duties. In a final session, 12 weeks after initial assessment, a graded return to surfing and soccer was collaboratively planned over the following three months with advice to make contact for guidance as required.

Nociplastic pain is a pain type likely to be underpinned by a range of mechanisms including central sensitisation as well as psychosocial, immune and/or genetic factors (O’Sullivan et al 2018).

This case study describes a patient with acute LBP that, through sequential testing of hypotheses, was deemed likely to have nociplastic- dominant LBP.

There have been few studies evaluating the most effective treatment for such patients, particularly in acute LBP; however, by applying the best available evidence for chronic pain within a biopsychosocial model, excellent outcomes were achieved.

It is possible that Mr X would have recovered at the same trajectory with different treatment; however, based on measures such as the Örebro, high level of severity, and strongly entrenched beliefs about his pain, it is more probable that recovery would have been slower without the program.

In order to positively impact upon this complex acute LBP case, a larger number of sessions than would be normally expected was required; analogous to the intensive treatment required for complex chronic LBP.

This case study illustrates an evidence-based approach applied in a manner that allowed individualising treatment to the presenting clinical features in a complex case of acute LBP.

>> Written patient consent for use of the information in this case study was obtained.

Dr Jon Ford (PhD), MACP, is a registrar undertaking Fellowship of the Australian College of Physiotherapists by Clinical Specialisation in the pain discipline. He is Associate Professor of Physiotherapy at La Trobe University; and Clinical and Managing Director of Advance Healthcare, a network of practices providing multidisciplinary pain management services to the community.

10.       Dagenais S, Tricco AC, Haldeman S. Synthesis of recommendations for the assessment and management of low back pain from recent clinical practice guidelines. The Spine Journal. 2010;10(6):514-29.