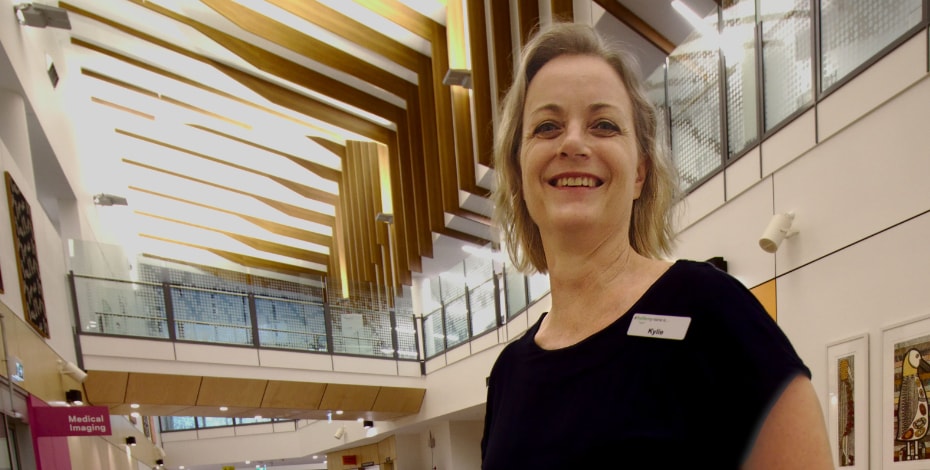 Adaptability comes with the Territory

The jump from clinician to manager was more of a push for Kylie Johnston, who was thrust into the job when her own manager resigned. What she thought would be a temporary posting in 2012 has evolved into a role where she now oversees the acute services as the director of Allied Health at Royal Darwin and Palmerston Regional hospitals. Melissa Mitchell reports.

In late March, Kylie Johnston is caught up in the aftermath of cyclones Trevor and Veronica, which hammered remote communities in the Northern Territory. While there is no imminent threat to Kylie or anyone in the Top End, hundreds of people had been evacuated to Darwin from remote communities in the Pilbara region for their safety, and Kylie has just heard that 300 of them have just missed a flight back home. That means there are 300 more people in Darwin than normal, and Royal Darwin Hospital is busy.

Kylie, an APA Cardiorespiratory physiotherapist, now has more on her plate than the usual challenges of having too few hospital beds and too many patients with complex health issues occupying them. There are contingency plans in place for when tropical cyclones and other meteorological events threaten Darwin and coastal surrounds but Kylie’s immediate concern is having no facilities available to divert patients to. Royal Darwin Hospital is the tertiary hospital in the Top End, and it’s a hive of activity.

Having a calm and unflappable nature in this, and other challenging situations, serves Kylie well. On this day Kylie is busy organising for more staff to work on the weekend to assist with discharge and patient flow but she’s also juggling other day-to-day operational demands such as rostering of staff, managing a multitude of personnel, managing the managers of the allied health departments and interfacing with agencies to move patients into supported accommodation, not to mention adhering to all the standard procedures, policies and protocols that come with the role. Kylie thrives on being in the midst of such activity; as the tempest swirls around her she’s multitasking on micro and macro levels, planning for now and for future endeavours.

As the director of Allied Health at both Royal Darwin and Palmerston hospitals, Kylie’s role is key to the smooth running of the acute services under her charge. She works directly with the managers of the various allied health departments including physiotherapy, occupational therapy, audiology, dietetics, social work, prosthetics, orthotics and podiatry—even the hospital chaplains fall under her command. The high-level managerial role is demanding and challenging, and to have a physiotherapist in the chair is a boost for the profession in the Northern Territory health system. But like many clinicians who make the jump into management roles, Kylie admits that she was more keen to return to her clinician work than she was on filling in for her first managerial role in 2012.

‘It was awful. It was a case of the manager at the time saying, “Well, I’m leaving and Kylie and another person will take over”. And I went, “What?!” Because I was one of the more senior people there at the time,’ Kylie says. ‘I wasn’t interested. Not at all. I was happy to step in now and then but no, I wanted to be a clinician. So when it was foisted upon me it was, “Ah, well I guess I’m going to have to do this for a while, but only until we find someone else to take on the job”. And that never happened.’

First, Kylie became the manager of Physiotherapy at Royal Darwin Hospital Having accepted that she was being directed towards taking on managerial roles on a more permanent basis, Kylie embraced the responsibilities and prepared herself by embarking on a Master of Health Administration through Monash University, which she completed in 2016. This put her in good standing when an opportunity opened up halfway through 2017 to take on a project role examining patient flow at Royal Darwin Hospital. At the same time, the Northern Territory government was commissioning a brand new hospital for Palmerston, a satellite city of Darwin.

‘There was a little bit of involvement with the patient flow project but then towards the time that the Palmerston Regional Hospital was coming up for commissioning and completion, more resources were needed on the Palmerston Hospital Project Team. So we, the patient flow team, moved across into that,’ Kylie says. ‘I was actually involved with standard procedures and the policies and protocols ... getting lots of paperwork going and making sure that allied health was planning and getting their own organisational plans in place so that it [Palmerston Hospital] was ready to start service at opening.’

This huge undertaking afforded Kylie the opportunity to be part of the team which oversaw the development of the 160-bed, $170 million hospital, which was jointly funded by the Australian and Northern Territory governments. It was the most significant investment in Northern Territory health services in more than 40 years, and opened to the public in August 2018. The hospital features a purpose-built 24-bed rehabilitation facility including a dedicated therapy space and a gym. A hydrotherapy pool is due to open later this year, and more extensive surgical services and maternity capacity will be included in the staged development.

‘The important thing was that it moved the rehabilitation and the geriatric services out there to an infrastructure that was a lot more suitable for those patients. The rehab clients here [Royal Darwin Hospital], they’d be on a ward and then they’d have to be transferred down to a bus in wheelchairs, put on a bus and driven 500 metres across to the road to the rehabilitation service building,’ Kylie says. ‘There, they’d have their therapy, then they’d have to come back on the bus, back for lunch at the hospital. And if they were having afternoon therapy, they’d have to do that all over again.

‘In terms of infrastructure, Palmerston is much, much better—the rehab gym and the services are right next to the ward. In terms of geriatric services, the geriatric ward [at Royal Darwin Hospital] was awful. There was just no other word for it, it was awful. It was a locked ward, you couldn’t go outside, the patients weren’t taken outside; whereas now they’re on a ground floor, they’ve got access to two courtyards, and outdoor sitting and it’s just made such an enormous difference to the patients.’

Kylie recalls one geriatric patient who burst in to tears when she first saw the new outdoor environment because it was just so nice. She believes there has been an improvement in patient flow at the hospital as a direct result of it having the new surroundings as well as through establishing the geriatric evaluation and management ward, which has the capacity of 24 inpatient beds. Services consist of specialist medical consultation and assessment, inpatient multidisciplinary care and referral to aged care community support services as required. The inpatient service operates around the clock and nurses are always on site, with medical, allied health and support staff available during business hours.

A range of outpatient services are to feature at Palmerston Regional Hospital including antenatal, diabetes/endocrinology, gynaecology, paediatrics, palliative care, postnatal, respiratory (including pulmonary lung function testing) and rheumatology. Some of the physiotherapists who had been working at Royal Darwin Hospital as well as those at the old rehabilitation centre have now moved across to Palmerston Regional Hospital.

Such a huge investment in healthcare services in the Top End was a big undertaking for all involved, and once the ribbon was cut on

Palmerston Regional Hospital, Kylie settled in to her new role overseeing acute services as the director of Allied Health at both hospitals. After spending much of her career as a physiotherapist moving around the country and having twice before lived in Darwin, Kylie concedes that for now she has no intention of ever leaving Darwin again.

‘Darwin is an amazing place to live and work. In some aspects it is not a comfortable place to live. But, on the other hand, it is a place to be comfortable in yourself, to be whoever you want to be, and aim for what you want. There are excellent opportunities in the Territory to develop as a clinician and to develop in the public service,’ Kylie says.

‘Public healthcare in the Top End, and in the Territory, is extraordinary in the true sense of the word. We see conditions and situations that would be absolute rarities or unseen elsewhere in Australia, and perhaps could be quite confronting for some. The distances that we deal with, resources, and the many cultural requirements, not only with the Aboriginal population but all the other cultures that make up our community, mean that working in public health in the Top End, you very quickly develop lateral thinking and problem-solving abilities like nowhere else.’

Kylie is passionate about working in public health, and she is keen for any physiotherapist thinking about making the move to the Territory to consider a career in the public system.

‘The acuity, multiple comorbidities and layering of complexity is really quite significant in patients up here, in terms of illness and the disease burden. It’s hard work, so you get your time management skills worked out,’ Kylie says. ‘And in terms of support and teamwork, it’s brilliant. There’s a wonderful organisational culture here.’

Centre of attention: the physio response to the coronavirus
May 01 2020