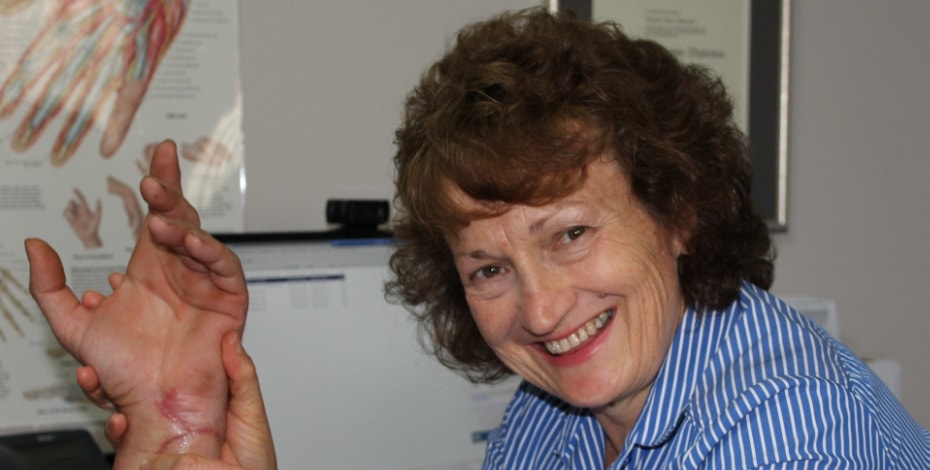 This month, Naomi White, APAM, retires after 40 years of dedicated practice. Marina Williams reports on the outstanding career of a renowned hand therapist, leader and mentor.

It was the hands-on aspect of working with patients that led then-high school graduate Naomi White to choose physiotherapy over medicine as the course to study.

Naomi describes this sliding door moment during career research as a happy accident that has given her 40 ‘fabulous years’ as a helper of people in both the private and public sector in Sydney and the Bega Valley in New South Wales. Thousands of patients later, Naomi, who is an accredited hand therapist and founding member of the Australian Hand Therapy Association, is ready for retirement and is grateful for the opportunity physiotherapy has given her in terms of career and friendships.

‘I was very seriously considering medicine … but I liked the hands-on component of physio and that was that … it was a great idea and I am very happy with that choice,’ she says.

Since graduating in 1979 (with a Bachelor of Science from the University of New South Wales and a Graduate Diploma in Physiotherapy from Cumberland College), Naomi has worked as a clinician and manager, gaining extensive experience in the treatment of upper limb conditions. She has mentored dozens of allied health professionals and treated thousands of patients, something of which she is immensely proud. Even in her last weeks of work Naomi is still actively seeing about 65 patients each week.

‘It’s an enormous effort for any physiotherapist, but that’s Naomi,’ says colleague and business partner Adam Woolacott. ‘Her work effort is second to none, and she always puts the patient first. She stays across the latest in evidence- based practice, sets a high standard and is highly regarded amongst referring hand surgeons nationally.’

For Naomi, it’s all part of giving back to a community that has given her so much. ‘I love working with people and being part of the Bega Valley community. I firmly believe I get as much from them as they do from me. I really like problem-solving and working with people to achieve their best outcomes— very often, devastating hand injuries have changed their lives so to be able to work through that with them and maximise their outcomes means a lot to me.’

Naomi was drawn to hand therapy at Sydney Hospital, where she worked from 1979 to 1986. ‘When I graduated from university, we had to have a year pre- registration. You got to vie for your favourite hospital and I did for Sydney Hospital. In my second year I got to do a rotation through hands and I knew it was for me,’ she explains.

Later, after successfully applying for a soon-to-be vacant hand physiotherapy role, she worked in a ‘wonderful team’ led by the acclaimed Professor Bruce Conolly. ‘It was such a special and unique time and the team was simply amazing, so I was lucky to be part of that. The surgeons held the physiotherapists in such high regard. Hand and upper limb therapy is my passion; fortunately, on moving to the country I found there was a definite need for those skills and I was able to continue with my special interest.’

The Bega Valley became home in 1990 when her husband pursued a job opportunity. Her young family settled into life in rural New South Wales, with Naomi soon joint managing the physiotherapy department at Bega District Hospital and also working in a private practice. In 2001, she opened her own practice, founding a second one in 2005. In 2007, Naomi and two colleagues, Adam Woolacott and Jeremy Fernando, opened Sapphire Coast Physiotherapy. Jeremy has since retired, with Matt Lehoczky coming into the partnership. Their partnership expanded into Cooma, establishing Snowy Mountains Physiotherapy with new partner Renee Pirozzi in 2011. The business has grown to be one of the largest rural-based practices in Australia, with 18 physiotherapists and 28 staff across five locations.

‘Naomi is leaving a legacy,’ says Adam. ‘She has made a difference to so many people and to this community. While we are colleagues and business partners, we are also family, so while we are excited for her to embrace retirement it is also bittersweet.

‘She is a special person and she is probably the most hardworking person I know. For about 12 years she was the only hand therapist within 200 kilometres, so she certainly took her role very seriously and not much got in the way of delivering services. There’s a story from well before my time, when Naomi had her new-born baby in one room while she was seeing patients in another. She didn’t want to disappoint anyone and it shows how seriously she took her role in helping others.’

Naomi is humbled by the praise, saying colleagues have enabled her success. ‘The thing that keeps coming to me when thinking about my career is the teamwork, and how willing you need to be to be innovative and respond to change. It keeps coming up again and again.’

With many career highlights, Naomi is particularly proud of her clinic establishing a two-year graduate program, and initiating a shared graduate model with NSW Health in 2013. The innovative program has been referenced in national and international publications, and also benefits the wider regional community.

‘It is difficult to recruit to the country, and our business is unique in Australia as we are based in five small towns in a large geographical area with none of the towns having more than 20,000 people,’ she says. ‘We are able to support people through our graduate program, which gives us our staffing and them a program that is responsive to their needs. The graduates come from all universities … we are one of the very few places in Australia where they can work in private and public health at the same time when they first come out of university.’

Investing in community is also important for success, with her clinic offering onsite services to regional businesses to ensure injured workers gain immediate access to physiotherapy treatment. At multinational company Bega Cheese, this resulted in a 76 per cent reduction time lost to soft tissue injuries in the first two years of the partnership. Workplace injury management in the region has also been enhanced after a rehabilitation provider was established in the region.

‘This addresses the limitation of having occupational rehabilitation of our local injured workers being managed by providers who are a three-hour drive away. It’s not just me making these things happen, it’s a team of us working together to achieve many outcomes that focus on the patient and community.’

This also includes providing annual APA courses for the physiotherapy team ‘at home in the Bega Valley’.

‘This local in-service program is a baby of mine. It means our staff can update their skills together, without having to travel to the city and spend time away from family. It’s important to provide continuing education locally to a high standard.’

In retirement Naomi will remain involved in knowledge-sharing, mentoring the region’s incoming hand therapist, between ‘lots of trips to the snow this season for the white fluffy stuff’. International travel includes going to Fiji to volunteer with a hand therapy – hand surgeon group.

Reflecting on a four-decade career, she acknowledges the APA in being central to her profession’s development. ‘When I first graduated the big buzz at the time was that physiotherapists didn’t need to work under a doctor’s referral. We have come so far since then, with physiotherapy research now directing some areas in medicine, such as in the treatment of what is colloquially referred to as tennis elbow. Plus, we have much more diversity within the profession, with women’s health, manual and sports therapy, cancer and rehab programs. The independent standing of the physiotherapy community within the medical community is strong. It’s wonderful having the APA guiding us and ensuring we have a strong voice within the wider community.’

To the next wave of physiotherapists, her advice on achieving success within the profession and business is about keeping it simple. ‘It’s about being responsive to community needs and being alert to that, and being able to work with other physiotherapists, doctors and local employers. To run a business successfully, you need to spend time not only within it, working, but on running it, and then investing in its people. Only then can you have true success. I’ve been lucky, I have always worked with fantastic people.’