From elite athletes to astronauts 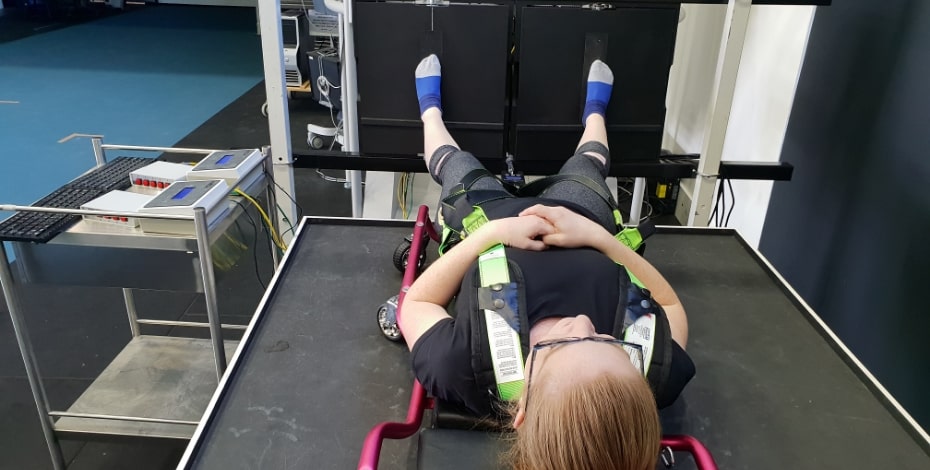 From elite athletes to astronauts

Canberra researcher Professor Gordon Waddington has applied his research into proprioception and movement control to a diverse range of uses, from high performance sport to space

When part of the musculoskeletal system is injured, the brain changes to accommodate the injury by creating new movement pathways.

It’s an ability that spans neurology, psychology and human performance.

‘A musculoskeletal injury is not a brain injury per se, but it has the effect of being a brain injury,’ says Professor Gordon Waddington MACP, who is an APA Sports and Exercise Physiotherapist and holds research professorships at both the University of Canberra and the Australian Institute of Sport.

‘If you change your movement pattern with injury, it changes the distribution of parts of the brain, in the cerebellum, motor cortex and sensory cortex.

‘If you’re not using it because you develop a limp, for instance, or you favour a part of the body, it changes that component of the brain.’

Gordon’s research focuses on this neuromuscular intersection, particularly proprioception or somatosensory perception—the ability of the brain to sense movement, action and location—looking at how athletes respond to injuries, how quickly they recover and so on.

About 30 per cent of injured athletes will go on to reinjure themselves within a short period of time and his research is providing some clues to why this happens.

‘We commonly measure how fast they run, how agile they are, how strong they are and how good they are feeling.

‘But when you test them with these somatosensory measures, you find that roughly a third of them tend to have poorer somatosensory lower limb measures and they haven’t recovered.

‘We don’t know why particular groups are less likely to recover.

‘Perhaps in some people, the brain kicks back into gear quickly and reallocates the real estate more effectively.

‘In some it doesn’t seem to do that and those are the ones who seem to go on to get the subsequent injury,’ Gordon says.

‘If you’re in an elite environment, then that’s particularly interesting because they’re the ones who are going to cost a lot of money to rehabilitate and return to sport.’

The person stands on a platform, which can move in different ranges of motion.

While most people can pick up a five-degree difference in range of movement, it can be very difficult to identify one degree of separation.

‘The algorithm that does the analysis is where a little bit of the secret sauce is.

‘We’ve finely tuned it so that individuals who are close but missed get a better mark than individuals who’ve got no idea and are just guessing,’ Gordon says.

The testing equipment goes a step further by measuring visual and vestibular function at the same time.

This accounts for external factors that affect the autonomic nervous system and change the physiological response, such as a viral infection, so that the subconscious reflexes are the primary component.

‘You can’t be good at it by chance.

‘You can only be good at it if you’re actually getting the response right.

‘If you’re not good at it, it just comes out with a chance measure and that shows the difference,’ explains Gordon.

‘We like to know if you’re performing poorly because something else is going on rather than knock you out simply because of your performance at that moment in time.’

Gordon says that in addition to identifying how athletes will recover from injuries, the somatosensory ability can also be used as a predictor of talent—for success in most sports, athletes need to have a very highly attuned sense of where their body is.

However, while it has implications for choosing the athletes who will be trained to elite levels of performance, it is just one of many factors that need to be considered.

‘There’s no correlation between your years of training as a high-performance athlete and your somatosensory ability.

‘They’re separate functions, which means that you have to actually have this underlying skill set, then you have to do the years of training.

‘If you’re investing time and resources in training elite athletes, you want to know that they have got this ability already,’ Gordon says.

In addition to its applications in predicting performance and reducing time spent injured in sport, Gordon’s research has also expanded to look at the effects of disuse on somatosensory perception.

Astronauts, for example, who use their arms and upper bodies to pull themselves around in the weightless environment of the International Space Station, suffer from significant muscle atrophy, especially in their lower limbs.

‘At the moment, if you flew eight months to Mars with the current set-up, you’d have trouble standing up when you got to Mars.

‘It is actually quite a significant issue, so there have to be effective interventions in place before we can do that,’ he says.

Gordon and his team have been working with NASA’s Johnson Space Center, which has a sensorimotor research program, to refine his system to assess the impact of weightlessness on an astronaut.

They are also developing a sensory sock that helps to counteract those effects.

Their studies have shown that as soon as the load is removed from the feet—by lying down, for example—the somatosensory performance drops significantly.

‘We’re looking at interventions to try to minimise that reduction of performance—things to stimulate the sole of the foot, and the lower limbs, through the skin to reduce that loss.

‘We’re using tactile surfaces against the skin, such as socks with corrugations inside.

‘When you wear those socks while you’re riding on your exercise bike or doing a resistance exercise, it helps to stimulate them,’ Gordon says.

Gordon says it was challenging to come up with a way to stimulate the feet through the skin.

Adding to the challenge was the body’s tendency to get used to a stimulant and stop paying attention to it.

‘However, if you put your watch on your other arm, you’ll know it’s there and it will probably be a nuisance for at least a while until your body accommodates and starts to ignore it.

‘This happens with anything that you do like this; you’ve got to keep putting it on and off and changing that stimulation effect,’ Gordon says.

The solution, says Gordon, was to design a pair of socks that the astronauts could wear during their exercise sessions.

The socks have been tested in subjects using ‘gravity beds’, which provide acute simulations of low-gravity environments, and results show that they enhance somatosensory performance.

The next step will be to test them in prolonged bed rest studies that simulate low-gravity conditions.

This research has to be done in a specialised facility and will depend on space research priorities and schedules, so it is unlikely to begin before mid-2023 or even 2024, says Gordon.

In the meantime, he is looking at other applications for his research.

One option is the potential for using the sensory socks in sports and exercise.

He’s already shown that wearing compression socks can improve somatosensory performance—probably because the movement of the sock against the skin on the foot, ankle and calf as the foot twists and moves makes the brain more aware of the foot and ankle—and is now looking at whether the sensory socks have a similar effect.

Gordon thinks the biggest application of his research, however, may be in falls prevention in older people.

‘That same measure of somatosensory performance is strongly predictive of your falls risk.

‘Physical exercise in all forms is very important as we age and individuals who are less active are simply de-training that whole component of the movement system,’ he says.

Some of the exercises and interventions he has designed for athletes and astronauts to improve their somatosensory performance can be adapted to improve movement control systems in people at risk of falls due to ageing, concussions and other neurological injuries and conditions.

Gordon says that we should all be walking on a variety of surfaces to provide our feet with more stimulation and keep our somatosensory perception abilities actively engaged.

‘Unless you physically go out onto a natural surface, you can spend all of your day on horizontal flat surfaces.

‘That has an impact on your brain as well because you then don’t have the ability to operate outside those ranges as effectively as somebody who’s moving on more natural surfaces all the time.’

>> Gordon Waddington is one of the founders of Prism Neuro, a company launched to commercialise the somatosensory performance testing technology for use in sport, space, health and military applications.