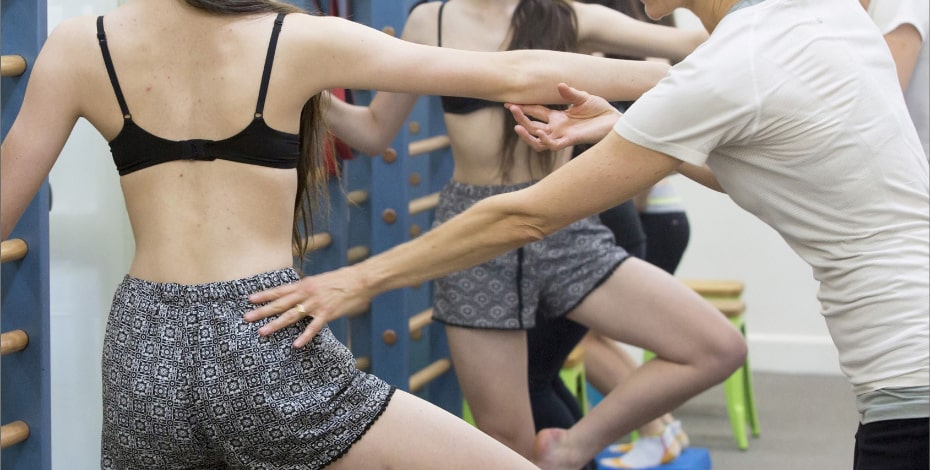 Rebecca Harding’s passion for treating spinal conditions eventually led to her practice solely focusing on the diagnosis and management of scoliosis.

It was Greek philosopher Heraclitus who said, ‘change is the only constant in life’. But when dealing with a variation in spine alignment, Rebecca Harding, APAM, says a fair dose of vigilance is also needed.

‘Every big curve was once small so don’t dismiss the small curves,’ the leading scoliosis clinician says. ‘If a curve has been identiﬁed in a growing kid, it needs to be investigated further.’

Rebecca takes a proactive approach to the diagnosis, treatment and management of scoliosis. For more than a decade she has been focusing 100 per cent on the spinal condition after 15 years previously working in dance and Pilates-based physiotherapy.

‘If you pick it up early enough, the physiotherapeutic scoliosis-speciﬁc exercises may be enough to steer the spine towards better alignment, preventing the need for a brace,’ she says. ‘If the curve is in bracing range already, then it is “all stops are out” and we add the wearing of a brace to try to reign it in, as we are then trying to prevent the curve progressing to surgical range.

‘In some kids, it’s unfortunately picked up too late to try non-operative options. In this scenario, our pre-surgery physiotherapy aim is to address any associated soft tissue restrictions that may oppose the surgeon achieving a straight spinal fusion.’

Rebecca credits advances in scoliosis management internationally to a collaborative approach between allied health professionals,  surgeons,  doctors  and  researchers. The latest developments will be discussed at the international Spine Week conference to be held in Melbourne in April. The conference is set to bring together 23 international scientiﬁc societies, including the renowned Society on Scoliosis Orthopaedic and Rehabilitation Treatment (SOSORT).

SOSORT was founded in 2004 with the goal to increase scientiﬁc knowledge, further consumer education, and develop collaboration around better non-operative management for spine deformities. This is the ﬁrst time the conference will be held in Australia and Rebecca, who convened a panel of researchers on Physiotherapeutic Scoliosis Speciﬁc Exercise at Dubrovnik in 2018, says the event is an opportunity for physiotherapists to upskill on spinal conditions.

‘They would ﬁnd it hugely rewarding. Scoliosis is more common than we think and being up-to-date in what is available out there for clients is important when in our care.’ 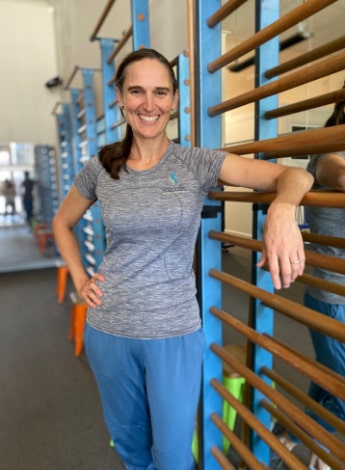 Rebecca says she opened Australia’s ﬁrst clinical practice to focus solely on non-surgical treatment of the condition in 2013. She has treated patients across the Asia-Paciﬁc region and delivered free education workshops to hundreds of peers in recent years.

She treats different types of scoliosis, including adolescent idiopathic and adult degenerative, which comes on later in life. ‘We are seeing increasing numbers of clients with the latter, who present to the practice for assistance with pain management and maintaining function,’ Rebecca says.

‘They often have painful rotolateral-listheses present in the spine that are assessed on X-ray. Actively looking for them is important as they can progress quite quickly and their presence certainly changes the exercises and techniques we select for treatment.’

While scoliosis, by deﬁnition, is considered a three- dimensional deformity of the ribcage and spine, strong psychosocial factors related to the change in aesthetics also need to be monitored throughout treatment.

‘The adolescent-onset type is a really tough gig for kids, who are having to cope with all the puberty changes in their body already, let alone having a spine and a rib cage that is veering off and changing their shape in other ways. It is really important that the scoliosis and treatments involved don’t lead to them feeling like the rest of their lives are eroding away.’

It was through a troubling medical condition when a teenager with a love for dance that initiated Rebecca’s interest in spinal challenges. While stress fractures in her feet eventually forced her to stop dancing, the need to seek treatment with a physiotherapist prompted her to study physiotherapy at The University of Sydney and pursue what would become a long-held interest in exercise rehabilitation.

After graduating in 1996, she initially deliberately steered away from being involved in dance physiotherapy as the emotions of having to stop dancing herself were still too raw. Eventually, she returned to practice in her passion after progressing through certiﬁcation for Pilates- based rehabilitation from 1997 to 2004, and became an examiner and course provider for the Australian Pilates Method Association and consulted to the Australian Ballet Company and Australian Ballet School.

‘Through all this I ended up loving spines and basically the more complex the spinal situation the more I loved it and was gladly up for the challenge.’ The interest in scoliosis came when a fellow physiotherapist, whose son was diagnosed with the condition, told her of a physiotherapist in Sydney, Larry Cohan, who had returned from Europe with scoliosis-speciﬁc training. ‘Within three months I was overseas getting qualiﬁed myself; that was 10 years ago.’

In 2010, Rebecca gained her initial Schroth-based scoliosis-speciﬁc exercise qualiﬁcation and a year later returned overseas to complete an advanced qualiﬁcation with Dr Manual Rigo, founder of the Barcelona Scoliosis Physical Therapy School (BSPTS). In 2013 she was accepted as a member of SOSORT and later gained qualiﬁcation in Italian methods of scoliosis management.

The BSPTS Schroth-based method is described as a physiotherapeutic treatment system that addresses an individual’s speciﬁc restrictions and asymmetries associated with their scoliosis. It involves postural correction in three planes, expansion techniques to open collapsed areas, stabilisation and biomechanical training into function.

What works best, says the clinician, is establishing a well- working multidisciplinary team around the client. ‘Having an openly communicating team made up of surgeons, orthotists, physiotherapists and psychologists brings the best outcomes with the least stress.’

Orthotists, in particular, are integral to treatment and at her clinic, Scoliosis Physiotherapy, two orthotists join the physiotherapists in offering options to adolescent and adult patients, which make up a 50/50 split.

‘Treatment has changed quite a lot and part of scoliosis management is working hand-in-hand with the orthotist. We now look to address the three-dimensional nature of scoliosis rather than the traditional bracing of the past.’ For adolescents the ‘effectiveness’ of the brace in stopping curve progression is dose related.

‘The more hours in it the better the outcomes. However, when a new teen is going into a brace, usually they don’t know anyone and having to wear it as close to 23 hours a day as possible—essentially only off for exercise—can be stressful.’

To ease the stress, she created a peer-led support system for braced teenagers of the practice. ‘It involves having already-braced kids reach out and provide support to the new-braced kids, so they do not feel alone.’

As treatment continues to advance, so too has the  number of BSPTS-trained physiotherapists in Australia, with 10 colleagues in ﬁve states qualiﬁed in the scoliosis- based method. ‘Now Larry and I are teachers for the  BSPTS course and are responsible for training in the Asia- Paciﬁc region, which is daunting and exciting at the same time.’ As Rebecca readies to travel to New Zealand and Malaysia to teach scoliosis diagnosis and management, she hopes more colleagues will pursue a career in treating the spinal condition.