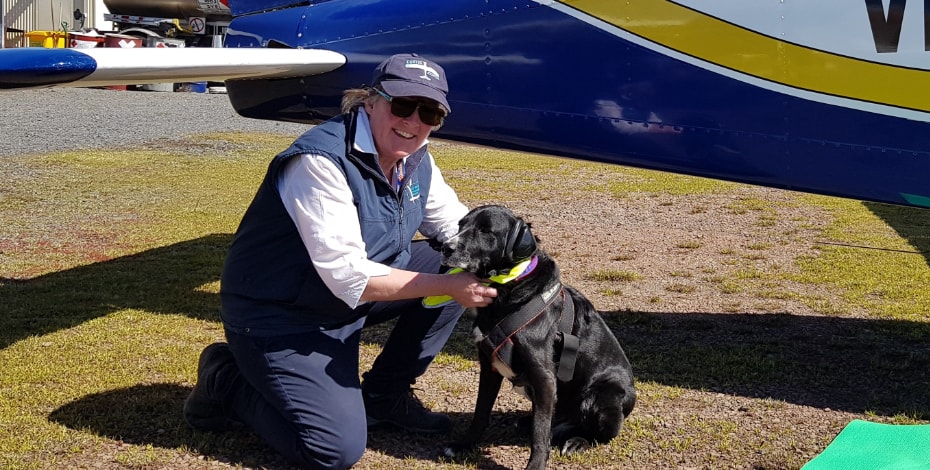 High-flying adventures of a physio and her pooch

Around the central west region of New South Wales, Meredith Schwilk and her dog Woofy are better known as ‘The flying physio and Woofy the wag-tail wonderdog’. But behind that friendly moniker is a physiotherapist dedicated to meeting the needs and challenges of a far-flung rural clientele. Melissa Mitchell reports.

Stretched out on the backseat of the Piper Cherokee plane and fast asleep, Woofy is about as calm as air travellers get. From time to time his pilot and adoring owner, Meredith Schwilk, will look over her shoulder to check on him mid-flight only to find that he has barely moved, occasionally swapping ends of the seat for a more comfortable snooze.

For almost four years Woofy, a border collie cross cocker spaniel, has travelled either by car for five hours or made the two-hour, 10-minute flight from Orange to Cobar with Meredith once or twice a month. Such is his excitement at the prospect of flying, Woofy is tied up pre-flight to allow Meredith to load her equipment before he eagerly jumps on board, finds his spot on the back seat and settles in for the journey. Meredith hires either a four-seater Piper Cherokee or Warrior, and Woofy makes himself right at home.

‘He’s harnessed securely on an absorbent mat on the back seat so he can’t get into the front seat and upset the controls,’ Meredith says. ‘He’s really good, he sleeps most of the way. With the help of Troy from Thomas Aviation we started out by first introducing Woofy to the planes in the hanger, then I got him in the back seat without taking off. A friend, also known as “Debi the Dog Lady” [who trains and assesses therapy dogs] found us a suitable harness upon which Troy and I trialled the harness with Woofy in the back seat. We went for a circuit and landed—Woofy was just fine. We did that another day, and after that I took him on my own and we went on from there. Woofy had gained his wings.’

Such is Woofy’s nature that Meredith had him accredited as a Pets as Therapy dog. Now eight years old, Woofy is assessed annually, recently passing with flying colours. In her practice at Orange and at Cobar Primary Health Centre (part of the Outback Division of GPs), Woofy can usually be found curled up asleep under the desk or not far away. Not all Meredith’s clients are dog lovers so the patients are alerted, including with signage, and Woofy is kept away if requested, especially if clients have a medical or psychological condition that may be adversely affected by the presence of a dog.

Meredith says Woofy’s presence has helped quite a few patients open up in unexpected ways. One patient who came to see her for treatment for a condition that was almost better felt that he ‘better come anyway’.

He was discussing his condition when Meredith twigged that there might be more going on with her patient. ‘I said “there’s somebody I think I want you to meet”, and I brought Woofy in. Well his whole face and demeanour changed and he said “Oh gosh, this fellow reminds me of one of my old dogs”, a dog he’d had a really special relationship with. Then he disclosed what was worrying him.

‘This client was the type of man who normally copes with most things but understandably the ongoing stressors in his life had brought him to almost breaking point. “Would you like me to ring the doctor?” I asked and he replied “Oh would you, Meredith? I need help”. Thus I was able to speak with the GP who referred him on to a psychologist. Woofy’s a great ice breaker.’

Similarly, Woofy’s calming, gentle presence helped give another client the courage to open up about her experiences of domestic violence, one of the worst stories Meredith has encountered in her 31-year career. The client presented with neck pain and was barely able to turn her head, Meredith says. As the client began stroking Woofy and fondling his ears, she began her story.

‘As she continued her story her neck start to move. She had been too fearful to move her neck through pain for the previous two weeks while awaiting investigation; something like a bookshelf had fallen on her so she’d had a genuine physical injury,’ Meredith says.

‘Although she’d been out of the domestic violence situation for over two years, as she’s telling me her story, her neck started to turn, it was amazing to watch. I then taught her the deep neck flexor exercise and her head went round even further, her eyes opened wide and she said “this is amazing”. She said to me “you know, I never tell people this stuff, it must be the dog!” He indeed had facilitated the conversation—we wouldn’t have had it so easily without Woofy.’

While she and Woofy are definitely a tight team of two, Meredith says working in Orange and in Cobar would simply not be possible without the support of her colleagues and allied health professionals at both locations. While she may work in some isolated locations, she’s not one to work in isolation. The team at Cobar, both administration and health professionals, are tremendous, they are so supportive of their local people and visiting professionals, Meredith says. Likewise, she says her team in Orange are also fabulous and she would not be able to provide the remote service without such competent and committed people around her. ‘So many unnamed people are deserving of thanks to achieve the service out west, including other people in aviation, friends and family as well those briefly mentioned here,’ she says.

Meredith, who has been a member of the APA since 1988, is the owner of On The Move Physiotherapy Services in Orange and was one of three physiotherapists on staff until a physiotherapist recently had to take extended leave. Meredith is presently recruiting for another staff member to join the practice but, like other practice owners, she finds the rural location can present a challenge for some potential candidates—and physiotherapists become sparser the further west you go, she says.

The provision of rural and remote health services, such as medical, nursing, psychological and allied health, and the recruitment of high- quality professionals to rural areas is something of a passion of Meredith’s. She hopes to find another physiotherapist to fly with her to Cobar and continue on when she eventually retires, something that is not on the cards in her immediate future.

‘I am just a small cog in the overall picture. I think it is so important to recognise the skill sets of other professions as well as those of our own, and how we can all work together to achieve better health outcomes,’ Meredith says. ‘I also think it’s important that we encourage more physiotherapists to work in rural settings—there is a real need for paediatric, musculoskeletal and men’s, women’s health physiotherapists as well as those who work in aged care.’

Having recently been approached by an aged care facility in Cobar to provide her services there, coupled with her workers’ compensation patient load in the town as well as other clients, Meredith says she can cover the costs of air travel to the town for an additional day every six weeks this year. After recently passing accreditation as a Pets for Therapy dog for another year and renewing the carriage of animals permit (in process at the time of publication)—the approval required from the Civil Aviation Safety Authority to fly with Meredith—Woofy is taking to the skies for another year of service in the outback.

Dust storms, thunderstorms and a myriad of other meteorological events can impact on the best laid flight plans, as Meredith has discovered as part of her regular trips out west. She has only had one really close call during her time in the skies— an engine failure in August 2011. A forced landing left solo flyer Meredith with several small bruises from her seatbelt—and a bent mobile phone. She also recalls another time where approaching storms while en route to Cobar forced her to divert and land on a grass runway at Nyngan, where she had to spend the night. She was generously assisted by the local community: a kindly soul who operated out of the aircraft hanger at Nyngan helped sort out Meredith’s overnight accommodation and another helped facilitate a lift on a truck to Cobar the next morning when the weather hadn’t cleared, such is the generosity and spirit of folk in the west.

‘I’ve always preferred to be a clinician rather than totally work on the business,’ Meredith says. ‘I’m now enjoying working on the business a lot more actually, but that’s because I’m older and it’s harder work pushing through patients. I want to do things differently, but I still wouldn’t say I’m a particularly good businesswoman, which is also reflective in the decision to go out west—while it is not a great business decision, it’s a great lifestyle decision.’