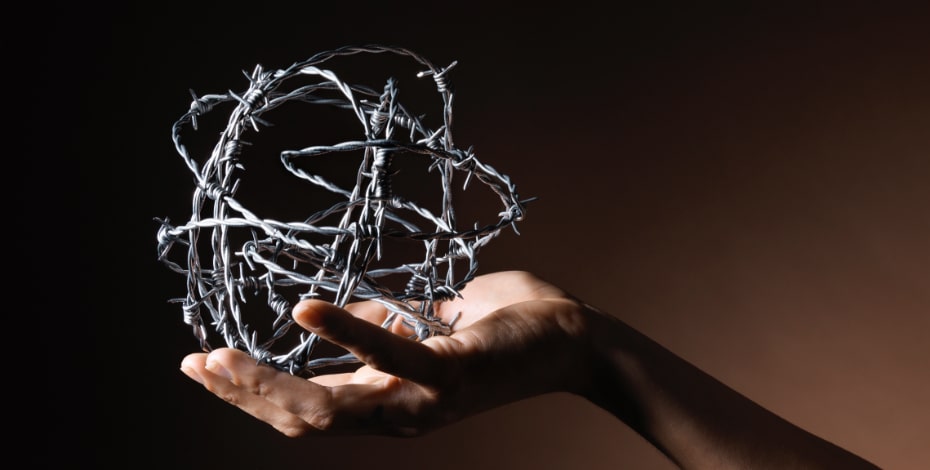 Matthew Forster presents a uniquely complicated case of complex regional pain syndrome to highlight the heterogeneity of the condition and the effectiveness of therapeutic interventions when significant biopsychosocial factors are at play.

Complex regional pain syndrome (CRPS) is a condition characterised by a constellation of pain, sensory, autonomic, motor and trophic symptoms.

It can occur following trauma/injury (CRPS-1) or following injury or disease of the peripheral nervous system (CRPS-2).

There is a tenuous relationship between symptom severity, functional impact and the extent of the initial trauma or other pathophysiological processes (Birklein & Dimova 2017, Goh & Chidambaram  2017).

Heterogeneity of individual experience of CRPS and the lack of imaging or diagnostic investigations to objectively evaluate the biological contributors to CRPS represent particular challenges to the management of this condition.

Potential pathophysiological mechanisms of CRPS include:

Immobilised in a moon boot for four weeks, his initial understanding was of pain due to structural pathology, which he expected to resolve by three months.

Four weeks post-injury, the patient reported onset of burning and tingling sensations throughout the left ankle, foot and shin.

He was prescribed pregabalin; however, he ceased this due to fatigue and clouded thinking.

At three months post-injury, the patient agreed to a return-to-work trial.

Conflict arose as his employer expressed negative comments about the trial and did not follow the restricted duties guidelines.

Active collaboration between all stakeholders is known to improve return-to-work outcomes (Nicholas et al 2019), but unfortunately this did not occur and the return-to-work plan was ceased.

Despite no other knee pathology identified during surgery and resolution of structural pathology demonstrated on postoperative imaging, the patient reported no change in left knee symptoms and held the belief that ‘there is still something wrong with my left knee.’

Eight months post-injury, the patient began to experience similar symptoms in his right lower limb without any specific mechanism of injury.

An episode of acute panic and anxiety resulted in admission to an emergency mental healthcare facility.

He was diagnosed with post-traumatic stress disorder (PTSD), adjustment disorder and mixed depression/anxiety. He was prescribed duloxetine and Zoloft and referred for psychological therapy.

He was then referred to a pain specialist physician who diagnosed CRPS-1, re-prescribed pregabalin and referred for physiotherapy.

He described no significant  medical or surgical history, apart from previous depression following emigrating from the United Kingdom to Australia 14 years earlier.

The patient moved in a slow, rigid and guarded manner with minimal stance phase knee flexion and significant hypertonicity of all lower limb musculature and big toes bilaterally.

During sit-to-stand and stance phase of gait, he demonstrated trunk lateral flexion towards the left side and was unaware of this maladaptive motor behaviour.

He demonstrated full active knee flexion and extension range, and three-quarters of all ankle movements bilaterally with pain reported throughout active range of movement.

Graphaesthetic awareness (tested by drawing letters on the skin) was poor bilaterally, as was his tactile acuity, measured by assessment of two-point discrimination.

The patient’s presentation meets the four components of the International Association for the Study of Pain Budapest Criteria (Harden et al 2010) for CRPS-1.

He presented with significant persistent pain, distress and functional limitation. He received treatment for specific orthopaedic pathology which had resolved and had been diagnosed with CRPS-1.

A nociplastic pain type dominates, with mechanisms including high levels of nervous system sensitisation, including temporal summation of nociceptive input and cortical re-organisation.

There were multiple maladaptive motor system changes including reduced strength, range of movement, hypertonicity and dystonia.

My approach was to apply  this evidence-based approach while acknowledging the complexity and heterogeneity of CRPS presentations.

I worked with the patient to ensure his treatment and management plans were individualised and meaningful. I assisted him to identify valued life goals including:

Management strategies consisting of cognitive, functional and lifestyle interventions were then discussed with him, aiming to use these to work towards his goals.

Pain neurophysiology education and reconceptualisation of pain assessment and understanding of pre-existing beliefs regarding the cause and meaning of pain is crucial.

Despite receiving advice regarding the resolution of structural pathology, the patient continued to believe that there was something wrong with his left knee and did not understand the cause of his ongoing symptoms.

His pain did not make sense to him, which led to fear and distress and maladaptive cognitive, affective and motor outputs (Vlaeyen & Linton 2000).

The first step in working towards his goals was to assist in making sense of his pain by using targeted neurophysiology of pain education (NPE) (Moseley & Butler 2015).

We used a common sense education model exploring not only fear and catastrophic thoughts, but all potential contributors which may influence musculoskeletal conditions (Leventhal et al 2003, Bunzli et al 2017).

NPE was provided in a semi-structured, individualised and conversational manner.

He had rudimentary knowledge from the pain specialist that CRPS was due to ‘too many pain signals being sent to the brain’.

Further education was provided to fill gaps in his understanding, including concepts such as:

This concept was broadened to include all other salient factors (including contextual factors) that represent a perceived threat to the individual, which are also known to activate this neuromatrix (Legrain et al 2011).

These complex neurophysiological concepts were simplified into messages allowing reconceptualisation of pain from an indicator of tissue damage to a warning sign of the perceived need to protect the body (Moseley & Butler 2015).

Personal relevance of the education including individualising the messages have been found to influence the clinical efficacy of NPE and degree of reconceptualisation achieved (King et al 2018).

The patient reported significant immediate benefit following NPE, reporting that ‘it was a light bulb moment’, and that ‘even someone without any medical training can understand this’, which is consistent with evidence that NPE can be understood by patients (Moseley 2003).

The patient commenced a structured functional rehabilitation program delivered in the context of his new understanding of pain.

Combining NPE with other interventions such as exercise is beneficial in reducing maladaptive cognitions and disability levels in persistent pain (Wood & Hendrick 2019) and can strengthen reconceptualisation of pain when the main learning concepts are reinforced in conjunction with exercise (Nijs et al 2011).

An exercise program was provided based on correcting maladaptive motor patterns.

This included normalising weight bearing during gait and sit-to-stand, reducing protective behaviours during these tasks and improving functional standing balance.

Specific motor relearning to reduce hypertonicity of big toe extensors was provided, with cognitive attention and visual feedback provided to maintain big  toe contact with the ground during gait.

We discussed the rationale for commencing general exercise, focusing on enhancing function and self-efficacy, while contributing to general and mental health wellbeing.

This approach was encouraged to increase the control he had over his rehabilitation and to improve confidence to function despite his pain condition (O’Sullivan et al 2018).

Advice to progress exercise starting in the home environment, to walking on the nature strip and then attending hydrotherapy in the community provided an opportunity to concurrently work on his physical and social goals.

Due to cognitive and affective factors, the commencement of exercise in environments away from either his own home or the physiotherapy clinic represented significant challenges.

Due to his social isolation and increased phobia of public places, a social activity program was implemented, prescribing a set number of outings to complete, including visiting a coffee shop, seeing a movie and going to the supermarket.

Using graded exposure principles, he was instructed at his first coffee shop visit to sit in a safe location, and then gradually choose to sit closer to other people, thereby exposing himself to higher levels of feared tasks.

He learnt simple cognitive behavioural principles including relaxation, breathing exercises and cognitive restructuring to use during perceived threatening situations.

He was initially resistant to engage in left/right discrimination training and imagined movements, but after reviewing relevant NPE and explaining the rationale, he quickly improved speed and accuracy scores using Recognise.

The patient engaged in motor imagery tasks but mirror therapy was not used, due to lack of a ‘good limb’ to provide visual input of normal movement.

Instead, he was encouraged to perform activities such as juggling, throwing and catching between left and right hands and upper body tasks involving crossing the midline.

This aimed at activating bilateral motor and premotor regions in a novel context.

This was an example of interventions not specifically identified in evidence-based guidelines, but a theoretical framework for mechanism of action was discussed. He found these to be a more enjoyable part of his rehabilitation program.

Frequent training was recommended, as this is positively correlated with the magnitude of pain reduction (Schmid et al 2017).

The patient has made varied progress with his initial goals. On reassessment, he rated his lower limb pain bilaterally as ranging between 5/10 and 8/10.

Despite minimal change in depression, anxiety and stress scales, his self-efficacy has slowly increased.

Although his score on the Lower Extremity Functional Scale decreased, his daily exercise time has increased, and he has actively engaged in planning ways to increase home-based exercise, include setting up a home gym.

His maladaptive loading of  his affected side during sit-to-stand has normalised, as has his left big toe function.

There have been significant improvements in two-point discrimination, indicating improved tactile acuity and cortical re-organisation.

He is continuing with individual psychological therapy fortnightly, along with an acceptance and commitment therapy group weekly.

He is increasing engagement in the community with additional exercise sessions including hydrotherapy, and has commenced vocational rehabilitation planning.

The patient’s presentation of CRPS is particularly complex due to spontaneous spread of symptoms.

Little is known about the exact mechanisms regarding spontaneous spread, but three possibilities have been discussed in the literature, including genetic predisposition, aberrant regulation of neurogenic inflammation and neuronal plasticity (van Rijn et al 2011).

Spinal mechanisms, mediated by neurogenic growth factors via commissural interneurons in the dorsal horn, allow afferent input from one limb to ascend bilaterally.

The patient reported poor sleep and gastro-intestinal disturbances relating to his anxiety.

These general health and lifestyle factors provide likely evidence of neuro-immune modulation of his pain state. Activation of toll-like receptors via a number of associated molecular patterns may mediate this mechanism (Nicotra et al 2012).

Deviations from evidence-based guidelines were a feature of this case.

This was due to the identification of the patient’s meaningful goals, and barriers which needed to be overcome.

The variation in the usual graded motor imagery process has been described above, and physical rehabilitation plans were often superseded by the need to use psychologically informed interventions to overcome anxiety and to assist problem solving.

It was hoped that his improvement in tactile acuity would correlate with a more meaningful reduction in pain intensity; however,  this was not seen.

His increase in participation in physical activity and social engagement would be expected to correlate with improvement in self-efficacy, which was observed.

However, his own impression of lower extremity function reduced on objective measures, and it may be that his ongoing psychological distress mediated the minimal change in pain intensity and reduction in perceived function despite observed increase in physical and social engagement.

This case of CRPS-1 with spontaneous spread of symptoms and significant cognitive, affective and social factors demonstrates the complexity of this condition and how physiotherapists can assist in management of its biological, psychological and social domains.

Louw A, Zimney K, Puentedura EJ, Diener I. The efficacy of pain neuroscience education on musculoskeletal pain: A systematic review of the literature. Physiotherapy Theory and Practice.2016;32(5):332-55.

Moseley G.L. Unravelling the barriers to reconceptualization of the problem in chronic pain: the actual and perceived ability of patients and health professionals to understand the neurophysiology. Journal of Pain. 2003;4(4):184-189.

Hall A, Richmond H, Copsey B, Hanzen Z, Williamson E, Jones G, Fordham B, Cooper Z, Lamb S. Physiotherapist-delivered cognitive-behavioural interventions are effective for low back pain, but can they be replicated in clinical practice? A systematic review. Disability and Rehabilitation. 2018;40(1):1-9.