Physical recovery from sepsis is a long road 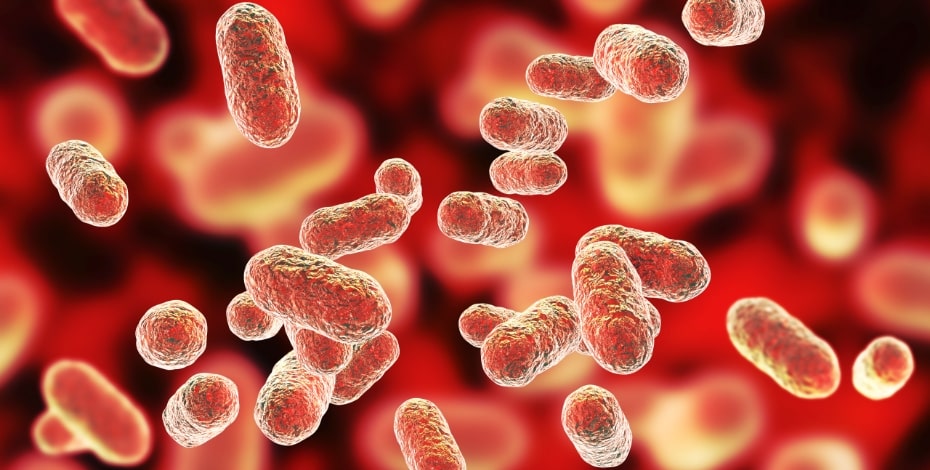 Physical recovery from sepsis is a long road

Mick O’Dowd went from being a healthy, robust and fit father of two to fighting for his life in an intensive care ward in a matter of days. What started out as a sore throat turned into an infection that very nearly killed him. Mick talks to InMotion about surviving sepsis and how physiotherapy has helped him get his life back on track.

The normally jovial and social dad was withdrawn, distant and unusually quiet.

It wasn’t until Mick took himself off for an out-of-character late afternoon lie-down that alarm bells began to ring.

In the few days leading up to Christmas Day 2018, Mick and his wife Katharine both had sore throats and a cold and Mick had discussed muscle pain in his glute that he put down to cycling—one of the many physical pursuits he enjoyed.

But the minor health concerns were dismissed as the family instead focused on the festive season ahead and their upcoming family holiday.

In the meantime, none of the usual treatments for Mick’s muscle pain were working and by Christmas night Mick was in so much pain that Katharine drove him to the local hospital’s emergency department.

Mick was given Endone (oxycodone) for sciatica, discharged at 7 am the next day and told to follow up with his local doctor.

Despite being unable to walk to the car and moaning in pain, Mick left the hospital with Katharine and headed home.

Mick’s condition worsened fast and within hours they were back at the hospital.

Mick had low blood pressure and a high heart rate and his breathing had become shallow.

He was quickly moved from the emergency department to the resuscitation room, where he was enveloped by a flurry of medical professionals.

Mick was then rushed to a larger hospital in Concord, Sydney, and sent straight to the intensive care unit.

Mick had developed a streptococcal myositis infection that led to a deadly sepsis response.

Masked by muscle pain and a sore throat, the infection had spread throughout his body—Mick was in septic shock and was suffering multiple organ failure.

Katharine was told that Mick had, at best, a 20 per cent chance of surviving the night.

Given massive doses of medications in the intensive care unit, Mick defied the odds and responded to treatment in small, incremental amounts.

By New Year’s Day Mick had already undergone several surgeries but his hands and legs had begun to wither and turn black.

Aggressive action was needed to save Mick’s life.

‘I wasn’t all that aware of what was going on but I do remember thinking that all I have to do is breathe,’ Mick says.

Despite all the best medical efforts, doctors were left with no option but to amputate Mick’s arms and legs to save his life.

His lower limbs up to just below the knee and his hands had turned black and were necrotic. 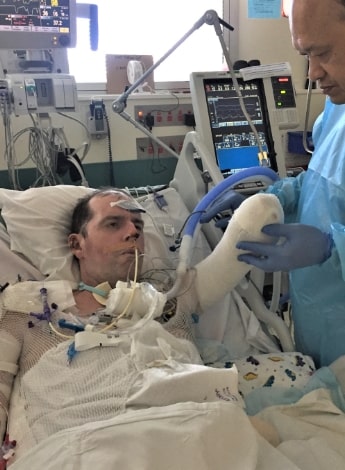 Mick had come out of his coma on New Year’s Day and was aware that the multiple amputations were a life-saving necessity.

The decision was made to undertake all four amputations during one surgical operation.

Mick’s recovery was complicated by the many skin grafts required to help close the amputation sites; large swathes of skin were harvested from his back, scalp and torso.

‘I was in intensive care for six months.

'There was a physio there who was unbelievable, amazing, that’s Frank Li.

'He did so much with me to get me back to moving, which was so important, because I’d been in bed for so long,’ Mick says.

‘The hardest thing was to actually get me to sit up in bed.

'That took a month, before I could sit up in bed.

'Like literally sit up and hold myself there for 10 seconds.

'After that I was exhausted.’

Mick was moved to another hospital and continued his rehabilitation journey, working on his core strength and ability to sit upright, before returning to Concord Hospital for more surgery on his shoulders.

Mick was put in touch with Jeremy Bernal Salcedo APAM from Rehab Health and Fitness Australia, for his postoperative rehabilitation.

It created a partnership that had, and continues to have, a profound impact on both.

‘We’re all very different in how we recover from sepsis.

'But you really have to think outside the box for someone like me,’ Mick says.

‘It’s pretty challenging; nothing is straightforward.

'Jeremy’s been really good at thinking about how we can apply or adapt exercises for an able-bodied person.

'He’s been working out exercises so I can keep getting my fitness and my strength back.’

The dual locations, Jeremy says, allow Mick to maximise his physiotherapy in both settings.

‘Rehab Health and Fitness Australia is a provider of community-based and clinic-based physiotherapy and occupational therapy support for clients,’ Jeremy says.

‘Mick accessed our physiotherapy support because we are able to provide more specific management for people with amputation.

‘The beginning of my management of Mick started out with being mindful of his post-shoulder surgery protocols.

'Initially, I wasn’t able to do a lot; however, it was important to ensure that Mick’s function could be maintained.

'Things such as trunk control and transfers into bed were the priority from a physiotherapy standpoint.’ Jeremy, who is a Master of Research candidate at Macquarie University, researching physiotherapy care for individuals with limb loss, says that once the restrictions on Mick’s shoulder movements lessened, the focus could then shift to physiotherapy interventions that incorporated shoulder function while priming Mick’s trunk muscles to enable him to bring himself out of a lying position into a sitting position.

Mick recalls those early days of physiotherapy as a game changer.

‘I couldn’t sit up in bed, effectively; I was lying in bed for so long.

'The physiotherapy at the start was great.

'Then you just keep building on it and that’s where Jeremy has been fantastic because he’s always thinking of the next generation of exercise and how we move forward.

'It’s really good to have someone who plans like that.’

As a quadruple amputee, Mick faces a unique set of challenges from a physiotherapy perspective.

Jeremy says his work involves finding creative ways to match the physiology with what Mick wants to achieve.

‘For me it is all about trying to be considerate of the very multidimensional, mosaic-like aspects of amputation management.

'In Mick’s case his treatment is a lot more intricate in terms of saying, “Okay, what can I do now to get where we want to go?”.’

In recent months, the focus of Mick’s treatment has been on weight-bearing through his residual lower limbs to coincide with the introduction of ‘stubbies’—equipment fitted over Mick’s lower limbs that enable him to practise weight-bearing in a modified standing position.

The stubbies, prescribed by Mick’s prosthetist from Innovo Prosthetics, allowed Mick to be upright for the first time since Christmas 2018.

‘I’ve got amputations above the knee and I’m using little sockets to stand and work out how a normal person would stand,’ Mick says.

‘Jeremy incorporates that into physiotherapy sessions for me.

'It’s challenging for him but I reckon he really enjoys the challenge and that comes across in the way he does his physio.’

Jeremy says the use of the stubbies was a turning point in Mick’s rehabilitation, which has more recently included the use of prosthetic lower limbs called Kenevo microprocessor knees.

These allow Mick to conceptualise the skills he has learnt with the stubbies and apply them to a standing posture.

‘That was quite pivotal because it allowed us to develop and adjust the tissues in preparation for weight-bearing and it also helps with preparing the musculature around his hips to, for example, stand upright,’ Jeremy says.

‘Because of that, it was important to ensure that progressively, we respected the nature of his residual limb and his skin management; we have to be very careful because we do not want to cause any adverse reactions, such as skin tears.

'But from there, he was able to demonstrate progressive loading through the residual limbs.

‘That is where we are at right now and it’s a matter of Mick being able to understand and get used to the sway of standing up.

'It has been quite a pivotal moment for Mick, because that then starts to open up opportunities for weight shifting—and even commencing stepping and walking.’

Each year in Australia 8700 people die of sepsis.

The Australian Sepsis Network says that the burden of death from sepsis is greater than the annual national road toll and that sepsis causes more deaths than breast, prostate or colorectal cancer.

The Global Burden of Disease study, published in The Lancet and released in 2020, used data from 109 million death records and 8.7 million hospital records in 195 countries and territories to estimate the burden of sepsis around the world. 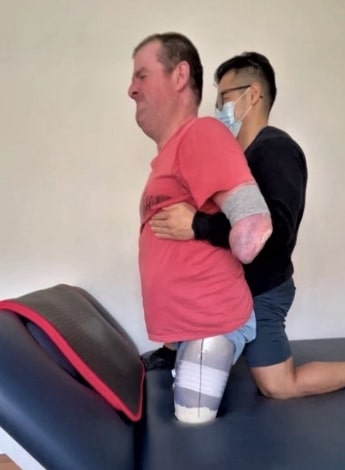 It found that there were 49 million sepsis cases and 11 million deaths in 2017—double previous estimates—with as many as one in five deaths worldwide related to sepsis.

Contributing author Professor Simon Finfer from the George Institute for Global Health says it is concerning that so many lives are being lost to a condition that is largely preventable.

‘Previous estimates of the burden of sepsis in Australia were mainly based on those treated in intensive care units, which put the number of cases at 18,000 and deaths at 5000,’ Simon says.

‘But the study estimate now gives a more accurate picture of the size of the problem by including sepsis occurring outside of the hospital—putting the number of Australian cases at 55,000 and deaths at 8700.

'Compared to lower income countries, there are very few injury-related sepsis deaths in Australia, which likely results from our well-organised and comprehensive trauma and critical care systems.

'This stands in stark contrast to the lack of such a system to deal with sepsis,’ he says.

‘We urgently need a coordinated national approach that addresses pre-hospital and in-hospital recognition and treatment to counter the significant death and disability caused by sepsis in Australia.’

Recently, Mick and representatives from the Australian Sepsis Network met with Minister for Health and Aged Care Greg Hunt to push the case for additional funding to increase sepsis awareness in hospital emergency departments nationwide.

‘It’s getting to that first responder and how they identify sepsis, because sepsis is preventable,’ Mick says.

‘That’s why they’re asking for money, so they can start a training program Australia-wide so that when people present with symptoms it gets diagnosed.’

The Australian Sepsis Network brings together individuals and organisations who are working to improve outcomes for Australian patients with sepsis and to provide information and support to the families and friends of people with sepsis.

The network is hosted by the George Institute for Global Health.

The George Institute provides the necessary infrastructure as in-kind support for the operation of the network.

The network and its member groups and organisations run awareness campaigns on World Sepsis Day, which is held annually on 13 September.