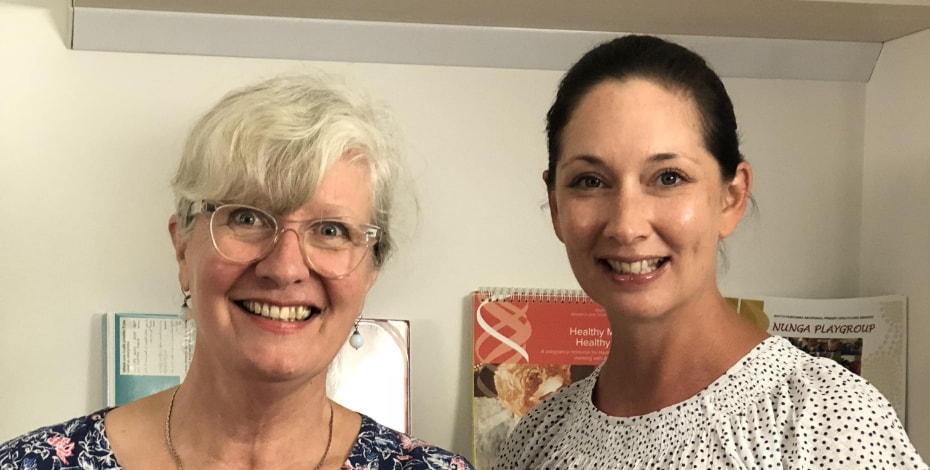 A redesign of a physiotherapy session that educates women on how to self-manage back/pelvic pain—and associated marketing collateral—is resulting in increased engagement and an uptake in services among Aboriginal and Torres Strait Islander women at the Women’s and Children Health Network.

Physiotherapists Tara Beaumont and Sue Bulluss spearheaded the project that focused on solutions-based content to improve health outcomes for Aboriginal and Torres Strait Islander women undertaking the Back and Pelvic Pain Management Class. The qualitative pilot study investigated whether a culturally competent, relevant and appealing education session could be co-designed with Aboriginal consumer input.

Their approach to redesign an existing program to specifically target the group was instigated after a review of attendance figures from 2017 showed Aboriginal and Torres Strait Islander women were not only unrepresented but also under-referred at the group physiotherapy session.

The session, held an average of five times a month at Women’s and Children Health (WCH), is a first-line approach in helping the women, who are triaged by referrals. It adopts a biopsychosocial approach to pain management that focuses on empowering the patient with knowledge and providing an array of strategies to enable them to self-manage their pain.

The data showed that of the women within the weekly group, 25 identified as Aboriginal, which represented about 12 per cent of all antenatal Aboriginal and Torres Strait Islander women birthing at WCH. Of these women, 20 per cent attended the existing group session (n=5), eight per cent cancelled their booking and did not rebook (n=2), and 72 per cent (n=18) failed to attend their group session booking without making any contact with the physiotherapy department.

‘Most women experience back and/or pelvic girdle pain at some stage during pregnancy,’ says Kate Goode, APAM, senior physiotherapist and, along with Tara, co-head of Women’s Health Physiotherapy at WCH.

‘The physical impact of pregnancy on the musculoskeletal system is well documented, yet our figures were showing only 12 per cent of Aboriginal women were referred to our team for back/pelvic pain and, of those who were referred, only 20 per cent attended their booked group session. So we had a large gap of women who were not being treated, plus there was disengagement in what we were offering.’

To learn more about their target audience to improve engagement, Tara and Sue organised a focus group with women, who were encouraged to participate by Aboriginal maternal infant care workers. The women had not previously attended the physiotherapy sessions.

‘The feedback from this focus group was invaluable and is testimony to their [Tara and Sue] skills in facilitating discussion and learning about what is important to individuals on a really deep level. The women conveyed that information in promotional flyers didn’t represent them, which included it being too wordy and the imagery was not culturally diverse. They also said they couldn’t identify with the delivery of the content in the session, that is, understanding how and why it was important to them,’ Kate says.

‘The team was able to identify key items that resonated with these women. The most important was understanding that Aboriginal women already talked among themselves about the need to “stay strong” in pregnancy for maternal and child health. They had to adjust their teaching method of delivering information about physical health in the session to empower them with self-management strategies.

‘Rather than ignore the lack of success we were having with a patient cohort, we chose to collaborate with women to improve the service offering and make it more specific to their needs and culture. Sue is a passionate antenatal educator and has this amazing ability to facilitate a session and bring people into a conversation. Through talking with these women she was able to learn about them, their culture and how they identified with each other. They opened up to her and through this shared empathy and understanding of cultural competence she and Tara were able to build a program they could relate to.’

On ‘unpacking’ key elements of the initial program, the project team and focus group collaborated to reassess and create material that would more likely appeal to Aboriginal women. This included writing a ‘less wordy’ booking letter, designing promotional material with imagery that was more representative of the target audience, and a face-to-face session that was more culturally competent in terms of language used and conversation flow to deliver key educational information. Three group sessions were then piloted across three months with feedback sought at the end of each one.

‘There were two constructive comments from the first session, which identified areas for improved physical comfort during group attendance, such as using different chairs and being able to move around, and both comments were acted upon for the subsequent sessions with no further concerns or negative aspects identified.’

Each session had strong attendance and overwhelming positive feedback.

Nine Aboriginal and Torres Strait Islander women, plus a support person, attended compared with just five in the existing model of care (60 sessions) in 2017.

In giving written feedback, most women commented on the opportunity to learn new things, which included the key exercises (n=8), the comfortable environment (n=1) and the ‘opportunity to sit, chat and have a laugh while meeting new people’ (n=1). One recognised she was not alone in the symptoms she was experiencing.

Kate says the project team’s approach to engagement and changing marketing collateral involved a range of stakeholders and is one that could be applied to other clinical areas to further empower a target audience to learn about their physical health.

‘The resultant group session has resulted in pleasing attendance figures and strong consumer satisfaction,’ she says. ‘The small, but powerful, adjustments made to the service delivery model enhanced cultural competence and improved healthcare access for the women involved in the study. The study has broad-ranging appeal within the health sector and learnings from this pilot could be considered by other clinical areas.’