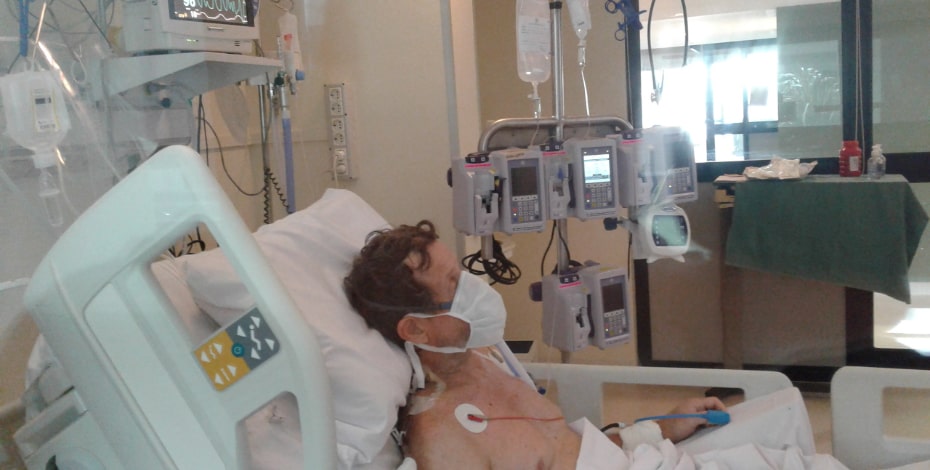 Sydney-based physiotherapist Karl Schurr and his partner Annie McCluskey, an occupational therapist and Honorary Senior Lecturer at the University of Sydney, were sailing to Antarctica as passengers on the cruise ship Greg Mortimer when the nightmare began.

On 21 March, after only seven days on board, passengers started developing symptoms that we now recognise as COVID-19.

Many passengers developed a high temperature and dry cough, all passengers and crew were quarantined in their cabins, and the ship returned to South America as borders were closing, berthing off the coast of Uruguay.

On 25 March, Karl’s health began to deteriorate. In addition to a temperature of 39 degrees, he had a persistent dry cough, fast laboured breathing, nausea and vomiting.

He slept in a chair, unable to breathe lying down.

On 30 March, he was diagnosed with bilateral pneumonia and received intravenous fluids and antibiotics from the ship’s doctor. Arrangements were made by the Australian embassy and Urguayan ministry of health to transport Karl by naval vessel to a hospital in Montevideo.

For the transfer, everyone, including Karl, wore personal protective equipment. Karl was unable to see clearly (his glasses were fogged) and was unable to think clearly (as he was severely desaturated after being disconnected from oxygen prior to the jump across from the cruise ship to the naval vessel).

Annie was not permitted to leave the ship and said farewell to Karl, unsure if he would survive.

Within five hours, Karl was admitted to ICU, ventilated and sedated. His chest X-ray showed extensive changes including ground-glass opacities, a feature of COVID-19.

Meanwhile Annie liaised by telephone with ICU staff, the Australian embassy and travel insurer, which quickly accepted Karl’s claim and need for hospital admission for COVID-19. Karl remained unconscious and ventilated until 7 April, when he began responding to verbal commands but was agitated, and experienced hallucinations for several days. 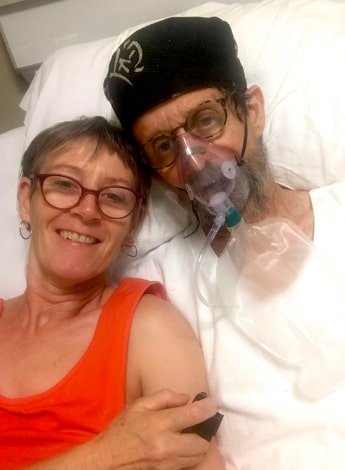 Annie moved to the hospital as an inpatient on 10 April, by which time Karl could communicate by phone, but both remained quarantined. No face-to-face contact was permitted.

This period of separation was difficult for Karl and Annie, for different reasons. Their first video chat occurred on 11 April, and the phone calls and video chats helped orientate Karl to his surroundings (ie, ‘You are in hospital in Montevideo. You have not been kidnapped on a ship in Europe’).

Karl was very aware how profoundly weak he was, unable to lift his arms from the bed or move his legs.

He panicked and was tearful initially, aware of the potential long-term consequences of a prolonged ICU stay.

Fortunately, muscle activity returned in all limbs, although he remained very weak until late May. He was unable to roll over or push himself up in bed throughout April, or tend to his basic needs.

Nursing staff washed Karl in bed and helped him move in bed, then sit out of bed, doing so with grace, humour and kindness. This humanity made Karl’s early stay in ICU tolerable.

Karl quickly went into ‘physio’ mode, establishing a routine of exercises to strengthen his legs in ICU. Each morning he completed up to 900 pushes on the end of the bed, at an intensity that did not trigger the oxygen desaturation alarm.

Karl was the sole occupant of a single ICU room, and had to manage his daily activities alone for three weeks, before he and Annie shared a room in late April.

All staff wore protective clothing and spoke a language Karl did not understand.

Interpreters were not used in ICU, although some staff spoke English. Karl also wears hearing aids, which needed new batteries. His hearing aids were difficult to fit as his upper limb function was poor throughout April.

Karl and Annie each recorded their observations during the three-month hospital stay, and have advice for therapists, doctors and nurses working in ICU and inpatient rehabilitation.

Always be kind. Kindness is not the same as being ‘nice’.

Kindness was displayed in many ways, such as nurses taking time to carefully clean Karl when he was incontinent, therapists making sure he was comfortable or could reach his meal tray before they left his room.

For Annie, a special act of kindness was an ICU doctor taking time to email a photo of Karl when he woke from the coma and a student nurse helping Karl charge his phone then call Annie. These events were especially memorable.

Work on improving your communication with patients

Make sure the person can understand you, particularly if they are from a non-English speaking background and/or wear hearing aids.

If in doubt, book an interpreter, even if only by telephone. Don’t assume the person understands what you are saying or instructing.

Quarantine restrictions also limited what equipment could be brought into his room. No handouts were permitted.

Karl’s doctor emailed copies of recent chest X-rays and progress reports to Annie, so they could view and discuss the images on a laptop during their daily consultations.

Annie established a ‘brains trust’ back in Australia of health professionals who searched for and appraised research about topics (eg, arterial blood gas procedures, prognosis of lung fibrosis), and returned summaries that could be shared with the treating team.

This helped Annie as a carer to stay informed about Karl’s treatment and condition, and ask informed questions of the treating doctor each day. Annie was able to link Karl into these daily consultations using FaceTime.

The importance of measurement

Always measure progress objectively, no matter how small these changes may be. Take baseline measures.

It is essential for anyone recovering from an acute catastrophic event to know that they are changing.

Measures can be as simple as recording whether someone can initiate a muscle contraction or not, how many times they can elicit a contraction, how many repetitions of an exercise they can do, or how long they can sustain a contraction.

Karl stresses the need for objective measures. He was fortunate to understand his predicament, establish his own exercise regimen and communicate changes to Annie by phone each day.

For patients without that type of background, measurements of change are even more important.

Clearly demonstrating that someone is changing may be the only thing that they have control over, in a stressful environment where control is in the hands of medical, nursing and therapy staff.

From the first day, each therapist needs to provide agency and control to the patient in ICU, no matter how difficult this may seem. For example, pushing on a set of scales at the end of the bed or when sitting to measure force.

If the person can push one kilogram more, perform three more repetitions, or hold a contraction for two seconds longer than the day or week before, before desaturating—these are achievements for celebration.

Exercises should relate to the person’s goals and priorities, not something the therapist thinks that the person ‘should do’; for example, leg extension against the end of the bed to strengthen the leg extensors for standing, transferring etc.

Physiotherapy staff arranged for a tape measure to be brought to Karl and Annie’s hospital room, so that they could measure walking distances and chair height. Embassy staff bought exercise books for recording practice.

Karl has noticed several news articles in recent months showing three or four therapists helping a patient to sit, stand or walk with an aid. These images are unfortunate because they make therapists the centre of attention, and imply that therapists are essential for practice to occur.

When Karl could not move in bed, he established independent part-practice exercises to strengthen his legs.

When he could not perform a standing step-transfer to his chair, he refused a walking aid and instead practised seated reaching and sitting-to-standing from the edge of the bed.

He knew that he needed to strengthen his legs and learn how to control his breathing without panicking. Annie helped by recording his practice.

After several days, Karl could transfer to a chair, and then take several steps with oxygen.

One of his early goals was to walk to the toilet. After two weeks, he could walk the five metres to the bathroom with oxygen, without an aid. Another goal was to have a shower, which was achieved after about five weeks.

Even with his rehabilitation background, Karl is still learning about and understanding the implications of COVID-19 on his lungs.

The changes in gas exchange capacity he previously took for granted now dramatically affect what he can do and informs what he records. He always keeps his goals front of mind.

Fortunately, Annie kept meticulous records of Karl’s repetitions and daily practice, so that he can see changes in performance.

These records helped remind Karl how much he was changing when he was unable to practise in April and May due to cardiac arrhythmias, and when he felt very unwell.

Back in Australia, he feels fortunate to have an excellent evidence-based physiotherapist at Liverpool Hospital who helps him stay focused on his long-term goals, understand more about pulmonary rehabilitation and suggests measurable strategies to help achieve his goals.

His current goals are to return to bush walking (intially Mount Kuringai to Bobbin Head in Sydney), resume bike riding and return to yoga.

Keep up to date at australian.physio/covid19.