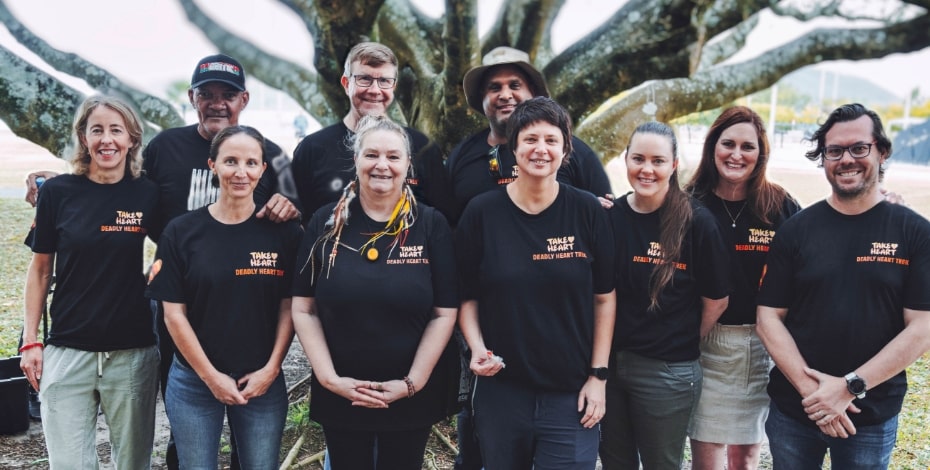 He joined the Trek as an educator and to help with engagement in the communities visited on the Trek.

‘I’m a Torres Strait Islander, topic expert and health clinician and have an education background.

‘I suppose that puts me in a position where, among all the other wonderful people on the Trek, I could help with education across all communities we visited and facilitate some cultural brokerage in Torres Strait Island and Northern Peninsula Area communities.

‘Cultural protocol dictates sitting down with the right people to have open discussions, to make sure that we were doing the right thing and were welcome, after explaining why we were there,’ Carl says.

‘There was that emphasis on observing proper cultural protocol and coming in respectfully.

‘Because, of course, there’s a history of going in and supplanting local views and imposing what you think is right on people.’

Carl says the approach taken by the Trek organisers and delivery team to observed cultural protocols was a strength of the Trek, which helped lay the foundations of ongoing relationships with each community.

Carl Francia, a researcher and a physiotherapist, joined the Deadly Heart Trek in Queensland this year.

‘It was a great trip with like-minded people with the same purpose—to end rheumatic heart disease,’ he says.

RHD is generally caused by recurrent bouts of ARF, which in turn is caused by an autoimmune response to a bacterial group A streptococcal infection, also known as Strep A.

While Strep A typically causes a sore throat or a skin infection, when left untreated it can progress to ARF.

While ARF is almost never seen in non- Indigenous Australians, Aboriginal and Torres Strait Islander children, particularly those living in remote communities across northern Australia, are at very high risk, as are those living in crowded urban households.

The highest rates of RHD occur in young adults.

Adding to the challenges, diagnosing ARF and RHD is not straightforward.

It requires careful assessment of symptoms and signs of the disease as well as evidence that the individual has had Strep A.

Patients with ARF are treated with antibiotics, usually in hospital, and long-term antibiotic prophylaxis is recommended to prevent recurrent infections—a difficult thing to achieve for patients from remote communities, who may have to spend extended amounts of time off Country undergoing treatment.

Using echocardiography, the Trek aimed to find and treat children with clinically silent RHD before it can progress to the point of requiring valve surgery, while also providing health education to community members and health services to help local RHD disease control and prevention.

Of the 971 children screened, all received ‘healthy heart’ education on symptoms such as sore throats and skin sores.

All of these factors play a role in the persistence of the disease in Aboriginal and Torres Strait Islander communities in Australia.

Sadly, there are more than 5000 Aboriginal and Torres Strait Islander Peoples currently living with RHD or the effects of ARF and it’s predicted that a further 8600, mostly children and young adults, will develop the disease by 2031 if action isn’t taken to stop ARF.

‘The rates [in remote communities] are similar to developing nations, to Sub- Saharan Africa and South Asia,’ says Carl.

‘It’s heartbreaking because it’s entirely preventable and it’s become rare since the 1950s and 60s due to improvements in standards of living and access to antibiotics.’

Carl first became interested in ARF and RHD when he did a rotation through the cardiac surgery ward at The Prince Charles Hospital in Brisbane, where he still works as a physiotherapist one day a week.

‘In 2020, I noticed a very different cohort coming through the cardiac surgical ward and ICU.

‘Every month we seemed to be getting someone who was completely different from our usual group of coronary artery bypass patients.

‘They were being admitted to our ICU, transferred from remote Aboriginal and Torres Strait Islander communities like Mornington Island, Aurukun, Thursday Island, the outer islands and Far North Queensland, and they were very young, usually just in their 20s or early 30s,’ Carl says.

‘They’d typically be in ICU for a month being stabilised and then need valve surgery.

‘So I started reading up on rheumatic heart disease and diving into the guidelines and I saw just how completely preventable it is, that it is almost entirely the burden of young Aboriginal and Torres Strait Islander Peoples.

‘I saw the inequity of it.’

Carl’s initial investigation identified gaps in the understanding of best practice treatments for these patients, such as ensuring that patients receive appropriate follow-up care to prevent recurrent Strep A infection and the autoimmune disease underlying the heart damage as well as improving the patient’s understanding of their condition and of the need for ongoing prophylactic antibiotics.

‘There’s scope for us [at The Prince Charles Hospital], as the premier heart and lung institute for Queensland, to improve our practice for this cohort and provide some education for all our staff.

‘But then there’s also a window of opportunity to provide that education to patients post-surgery.

‘For their disease to have reached that level of severity, patients had either missed a diagnosis as a younger person or fallen off treatment.

‘It’s really quite a big ask to be on a regimen of antibiotic prophylaxis, getting those intramuscular injections for so long—it could be from four years of age until the age of 21, depending on disease severity.

‘For our surgical cohort, following valve surgery, it is imperative that antibiotic prophylaxis is recommenced to ensure the success of the surgery and the recommended duration is 10 years or until the age of 40, whichever is longer.

‘Some people may fall off that regimen and there is particular risk when transitioning from childhood to adult care,’ Carl says.

‘These patients are older and may have different priorities.

‘They are able to reassess that risk.

‘They’ve just been through quite a big life experience—cardiac surgery.

‘There’s a window of opportunity to provide a bit of education to help patients make that decision to get back on prophylaxis.’

Carl’s advocacy at the hospital resulted in an opportunity to do a PhD looking at the epidemiology of RHD and its impact on remote communities.

His PhD project aims to bring together several large sets of data from the Queensland RHD Registry and from Queensland hospitals and emergency departments—pathology and death data, in addition to housing data (pending approvals)—allowing him to map disease patterns and progression against housing conditions and other socio-economic factors.

Children in a healthy heart and healthy skin education session (supplied by The Snow Foundation).

‘I want to look at very early disease progression, narrowing down this early latent (silent) phase of disease, from the time frames and factors associated with that first swab for sore throats or skin sores to the first episode of acute rheumatic fever, the recurrence of rheumatic fever and, I hope, an early diagnosis of rheumatic heart disease.

‘Many people are only diagnosed with severe disease, at the onset of complications such as stroke and heart failure, and then some, sadly, succumb to the disease,’ he says.

Carl’s frustration with the current persistence and management of RHD in remote communities is palpable.

‘We’ve known the solution for the past two decades.

‘Now it’s a matter of implementing those strategies.

‘The good thing is that there is a blueprint for eliminating rheumatic heart disease in Australia that was released in 2020 and we have a new guideline as well, which is the culmination of the scientific evidence on eliminating this disease.

‘The challenge now is the political will to implement it locally,’ he says.

‘When you see how we’ve responded to COVID-19, it’s not about whether we can do it, it’s why don’t we do it?

‘This condition affects the most disadvantaged people in our society in a very, very rich country.

‘In a time of unprecedented prosperity for Australia, Aboriginal and Torres Strait Islander Peoples still need to worry about their kids acquiring heart disease.

‘If we can have that sort of response for COVID, there should be no reason why we can’t respond in the same way to something like rheumatic heart disease.’