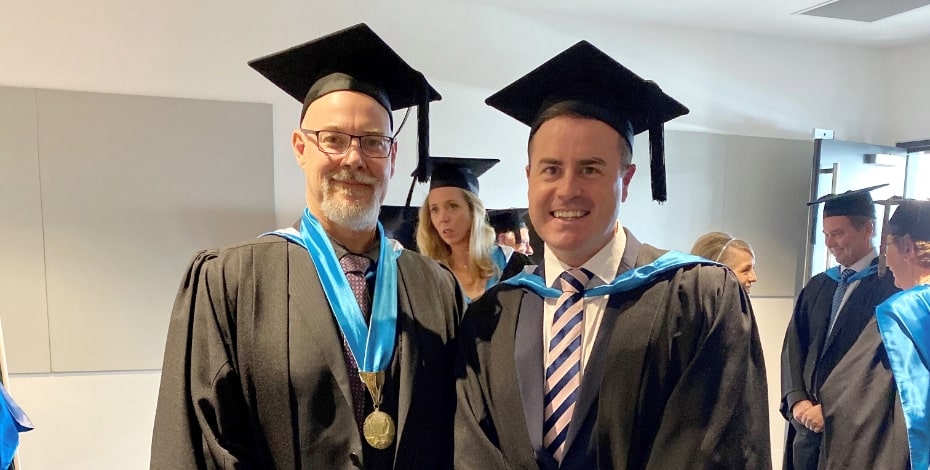 The incoming President of the Australian College of Physiotherapists, Tom McMillan FACP, has aspirations to help demystify its inner machinations and help grow the College. Here, Tom speaks with Melissa Mitchell about his passion for the profession and for promoting the College’s pathways and programs in line with its new strategic plan.

There is a buzz of excitement about what’s coming at the Australian College of Physiotherapists that may not be immediately evident from an outside perspective.

So the President-elect of the College, Tom McMillan FACP, has taken up the challenge of demystifying the institution and he wants to take you on that journey with him.

‘I’ve always been interested in physiotherapists having a clearly defined career pathway.

'I'm a strong believer in the role of physiotherapy in the Australian healthcare system, both in primary care and in the hospital setting.

'And I think that leading the College is a really important way to bring people along that career pathway, keep people in the profession and strengthen the role of physiotherapy in our health system,’ Tom says.

‘I would like to ensure that the College caters for what the workforce needs and what the health system needs.

Tom shares a moment with Dr Mary Magarey when she was named the first dual College-awarded Specialist Physiotherapist.

Having served on the College Council since 2016, including four years as the College Vice President under Darren Beales FACP, Tom will take the reins as President this January.

However, his association with the College stretches well beyond that; Tom is counted among the youngest in the College’s history to undertake specialisation training.

Tom became a Specialist Musculoskeletal Physiotherapist (as awarded by the Australian College of Physiotherapists in 2014) at age 30, partly because of his passion for managing patients with complex conditions.

‘My first engagement with the college would have been in 2012. Having finished a master’s degree in 2009, I went to specialisation as early as you possibly can,’ Tom says.

‘I think at the time I finished my Fellowship I was the equal youngest ever to have finished a specialisation at 30.’

Tom is a practising clinician, which enables him to add his real-world clinical experience into the mix of expertise and backgrounds of the College executive, which he says includes leading experts in the field of physiotherapy education.

Although Tom has an association with James Cook University as an adjunct lecturer in the College of Healthcare Sciences, he says he is not an academic.

His focus is on understanding the needs of the profession and of the broader health system.

This is complemented by his roles as a director of the Physio Plus Group, a council member of the National Rural Health Alliance, a board member of the Mackay Hospital and Health Service and a digital health adviser with the Australian Digital Health Agency.

For Tom, taking over the helm of the College comes at a time of real change for the institution.

His leadership, along with that of Vice Presidents Barby Singer FACP and Gen McGlashan FACP, will help drive the road map laid out in the College’s new strategy, released in October 2021.

The strategy details the vision for the College and its mission: empowering a physiotherapist’s lifelong learning journey towards maintaining the highest standards of clinical and professional excellence and professionalism.

‘We have a really well-defined strategy now,’ Tom says. ‘We want to see increased participation in our Specialisation Training Program and more people wishing to gain Specialisation or Fellowship via the non-clinical pathways, domestic and internationally.

‘We really want to be able to better recognise physiotherapists as they progress through their career.

'The College wishes to recognise people more formally and facilitate a viable consumer choice based on an understanding of the levels of expertise within the profession,’ Tom says.

Tom says the new Specialisation Training Program will have some changes, designed to create equity in the career pathway that is measured against the APA Competence Framework and is aspiring to have accreditation against the Australian Physiotherapy Council quality standards.

The new Specialisation Training Program will be supported by a learning management system that will be fit for purpose across the career pathway.

Significant work is also underway to create pathways in leadership, research and design for a generalist and rural generalist physiotherapist.

With the new Specialisation Training Program, the program model and methods of delivery and assessment might change, but none of the rigour will be watered down and the standards will be maintained, Tom says.

‘Fellowship training is the ultimate test for a clinical specialist, to put yourself forward for peer review.

'The program is overseen by leaders in our profession, who assess to the competencies of an expert. The standards are deliberately set very high. It won’t get any easier, but we hope it will be more accessible.’

There is also significant work in progress with the new titling credential. Stage two of the pilot is underway with nine candidates going through the credentialing pathway towards titling.

Evaluation and findings will be made available once the pilot is completed in early 2023 and the new Titling Milestone 3 credential is released, he says.

Tom says one of the challenges for the College is developing an understanding of the value proposition of Specialisation and College membership. This, he says, will require work both internally and externally.

‘We need funders, hospitals, insurance companies and the government to recognise physiotherapists differently as they progress through the career path and that should be recognition via improved funding, preferential rebates and the like in the future.’

It will include having consumers recognise more highly qualified physios for the extra value they bring, he says.

Part of Tom and the College Council’s remit will be working closely with the APA national groups to transition the streams that already have titling and/or specialisation pathways into the new program.

‘We’ll be relying on their engagement and discipline-specific expertise as we do that,’ Tom says.

‘I think collaboration is a really important way to ensure the success of the physiotherapy career pathway.

'The idea is to have a bigger College, so we’re building a sustainable model for the long term that we can work towards progressively. We need to see that the career pathway is integrated across the whole of the APA.

'We need the APA membership to come on the journey, from across the whole profession.’

When he starts his two-year term as President in January, Tom will also work to integrate the College and its inner functions into the broader profession to encourage more physiotherapists to engage with the College and all it offers.

‘Whether that be engaging with the work of the College and College committees and working groups or participation in the career pathway, our intention is to clearly
communicate the vison, mission and strategy and to bring all APA members on this journey,’ Tom says.

>>Contact Tom McMillian at tom.mcmillan@physioplus.com.au for more details about the College.